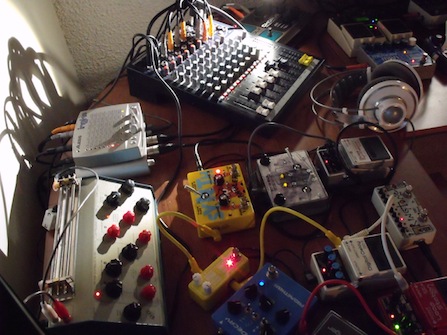 The 20th issue of the journal Vague Terrain (at vagueterrain.net) has 10 entries. They’re divided between, one might say, thought and art, between essays (plus one interview) about art, and then art itself. (One of the essays is mine. It’s titled “New York and New York, New York: A Midsummer Sound Diary,” and I wrote a bit more about it, and the overall Vague Terrain issue, earlier this week.)

This proposed distinction between “thought” and “art” is confused in part because the art here is, in most cases, accompanied by an essay written by the artist who committed it. Of the entries that fit in the “art” category, the MP3 provided for free download by David Kristian is placed in an especially self-aware context. Kristian knows his influences (“i.e Fripp & Eno, Tangerine Dream and Klaus Schulze’s early works,” he writes), and he explains how his career developed to the point where instruments are beside the point:

I use very little in terms of traditional electronic musical instruments to generate sound, preferring instead to rely on an ever-growing collection of effect units and guitar pedals. Everything you hear in the piece I submitted to Vague Terrain was made using pedals, with no actual synthesizers or sequencers, at least none with keyboards or other standard performance controls.

Which is to say, it isn’t so much a matter of instruments being beside the point as it is of traditional instruments being put aside in favor of less traditional ones. Even without the knowledge of the instrumentation (displayed up top, in the photo that accompanied the essay), the track, titled “In Your Sleep,” sounds heavily technologically motivated. The sine-wave phasing that provides much of its sound could easily be the noise on a song recorded in a poorly grounded studio. But in place of a song we have the noise. Or, more to the point, the noise becomes a song. With each subsequent listens the piece, which is just under 20 minutes in length, displays increasing variation, increasing warbles and inconsistencies in what initially seems to be an automated whole.

Between the track and the essay, one thing becomes clear: it makes perfect sense that much as ambient music draws attention to background sounds, ambient music is especially meaningful when perpetrated on tools that were previously relegated to a supporting role — tools such as the ones used here: “a variety of oscillator pedals, a sequenced ring modulator, fuzz(es), flangers, phasers, filters, choruses, delays, and reverbs.”

Get the track for free download in a Zip file, and read Kristian’s full essay at vagueterrain.net. More on Krisian, who has created music and sound for film and video games (including Splinter Cell: Conviction; Army of Two: The 40th Day; and TERA: The Exiled Realm of Arborea), among other things, at davidkristian.com.