A word of warning before you might click through to the comic about to be discussed. A lot of comics these days come emblazoned with mature-reader warnings, but this one really deserves it. There’s a lot of brutal sex and violence in this comic, usually at the same time. In the words of the website on which it is hosted, the webcomic, titled Crossed: Wish You Were Here, “is extreme entertainment for adults. Anyone under 18, or anyone easily offended, please go no further.”

It’s written by Simon Spurrier, whose The Afterblight Chronicles: The Culled I read last year, and whose more recent A Serpent Uncoiled is on my to-do list. In any case, below are two consecutive pages from Spurrier’s Crossed, which is illustrated by Javier Barreno. Like Afterblight, it is a post-apocalyptic tale narrated by a lucky survivor, in this case someone who, like Spurrier, is a comics professional — or was, in the narrator’s case, since there is little apparent use for comics after the fall of civilization.

The scene depicted here takes place on a lighthouse where the character and his fellow survivors keep a lookout for the diseased humans who outnumber them and threaten them daily. Sound is a difficult thing to present visually, as too is listening, and I was struck by how Spurrier and Barreno sought to do it: first by using a tool (the ear horn), an archaic one at that; second, by emphasizing the effort by depicting the concentration on the character’s face; and third by using comic panels to bridge the physical gap between the listening and what is being listened for, in this case the motor of an approaching watercraft: 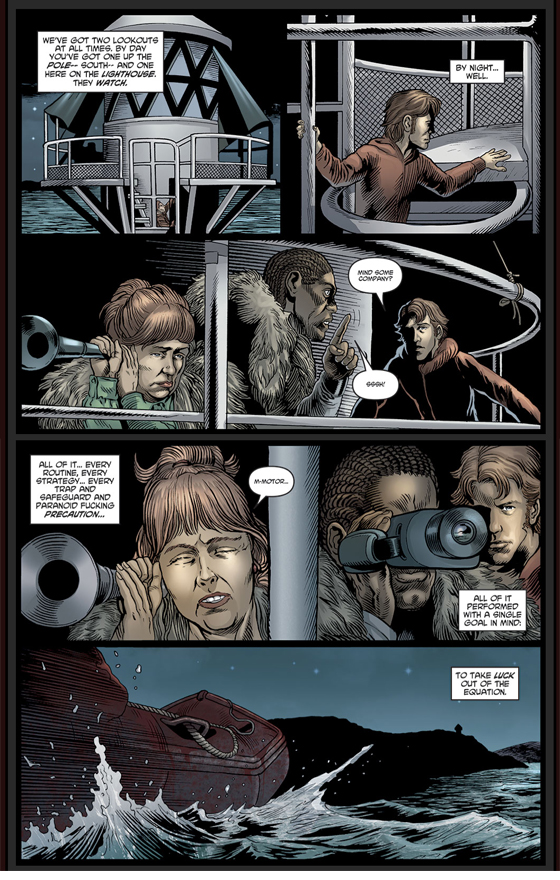 All reader warnings considered, here is where the comic is housed: crossedcomic.com.