“Writing about music is like dancing about architecture.” The phrase is often employed in an effort to deflate the very act of writing about music. Who exactly first uttered it remains unclear. Some point to Frank Zappa, others to Laurie Anderson, and others still to Elvis Costello. The latter option is especially meta because it aligns so well with David Lee Roth’s deflation of Costello’s own music-critical reputation: “Music journalists like Elvis Costello because music journalists look like Elvis Costello.”

He digs further into this deficiency by taking issue with a telling comment from a piece, published earlier this year, in the Telegraph:

Writing about music has a serious built-in problem, which is that the only thing worth doing is also nearly impossible: to convey something of what the emotional experience of listening is like.

The Telegraph story was written by a classical pianist, Jonathan Bliss, on the occasion of his first ebook publication, a Kindle Single titled Beethoven’s Shadow. It’s a kind of musical memoir, a study by Bliss of his involvement in Beethoven’s music.

Walker, a friend since my New Orleans days, dissects that above sentence thusly:

Okay, this is the problem. An attempt to describe architecture via dance does seem obtuse; so does choosing dance as a medium to express the three-out-of-five stars or thumbs-up-thumbs-down version of “criticism.”But “writing about”something, music included, can obviously mean something beyond description paired with a judgment rendered. (In fact, even “criticism”ought to mean a lot more than that.) So I reject the restrictions that the above definition implies.

I was going to take some polite issue with the “obtuse” matter, but Rob shortly thereafter kind of did so himself, when he introduced, in a subsequent post, the concept of “ekphrasis” to the discussion — it’s the Greek term for a dramatic description of a work of art. The term is useful in various ways, in particular by making clear a long history for cross-medium interaction if not downright cross-pollination, and especially for a literary tradition.

It also brings to mind another Greek term essential to the consideration of borders between mediums: Laocoön (pictured below), the mythological figure from which Gotthold Ephraim Lessing (in his landmark Laocoon: An Essay on the Limits of Painting and Poetry) derived his stricture that the arts, like the muses from which they borrowed their names, are distinct from each other. It’s a formidable text, but my interest in synaesthesia, the mixing of the senses, pretty much precludes me from fully agreeing with it. (As does my interest in comics. From a literary perspective, Lessing’s Laocoon can be read as a sort of a formalist version of Fredric Wertham’s Seduction of the Innocent.) 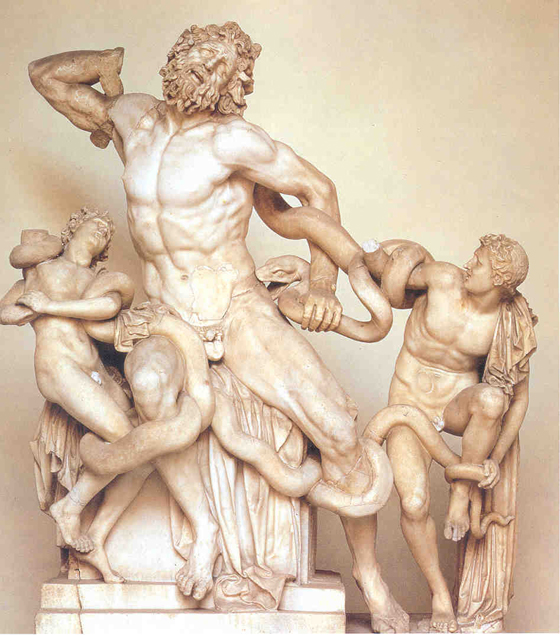 But mostly, the sheer Greek-ness of ekphrasis reminds us of that modern mythological figure: Iannis Xenakis, the Greek genius who was equally accomplished in music and architecture. The clear parallels — geometric, aesthetic, philosophical — between his work in both fields evidence the extent to which ideas move back and forth between them. Lessing may have written the book on the perceived distinction between art forms, but it was his countryman, the philosopher Friedrich Wilhelm Joseph Schelling, born a few years before Lessing died (and, it is worth pointing out, a contemporary of Beethoven), who contributed a significant correction by famously describing architecture as “frozen music.” To look at Xenakis’ scores and at his buildings is to observe forms take similar shape. (At the top of this post are, side by side, Xenakis’ score “Metastasis” from 1954, and a photo of the Philips Pavilion from 1958, which Xenakis designed while working for Le Corbusier.) It’s arguable that Xenakis worked back and forth between music and architecture in pursuit of some elusive singular goal, each alternating effort akin to lifting one foot after the other on his way up a ladder.

Now, back to the Telegraph story by pianist Jonathan Bliss that Walker quoted above. There’s an interesting moment in the Telegraph piece that reveals some of Bliss’ thinking. It occurs in a sentence that happens to immediately follow the one Walker quotes. It goes like this:

This is so extraordinarily difficult because to write effectively you need to be direct, clear and specific, whereas the glory of music lies in its abstraction ”“ its nearly infinite malleability according to the listener’s psychological state ”“ and if you don’t embrace that, you are sure to miss its essence.

What’s worth focusing on is Bliss’ sense of what he terms “abstraction.” Certainly there is an element of abstraction in music, but I’d push back on Bliss’ comment a little. Much perceived “abstraction” is still in pursuit of something; there’s often what musicians refer to as an “idea” at the heart of the compositional activity. To write about a work of music can be a parallel matter of pursuing those ideas. One might not, as a result, express the ideas in abstract terms, but like Xenakis on his way up the proverbial ladder I have depicted, the ideas remain the goal — arguably a willfully elusive goal — in both situations. Indeed, such writing may not “convey” the “emotional experience,” as Bliss puts it, but it may bring its own pleasures to the pursuit.