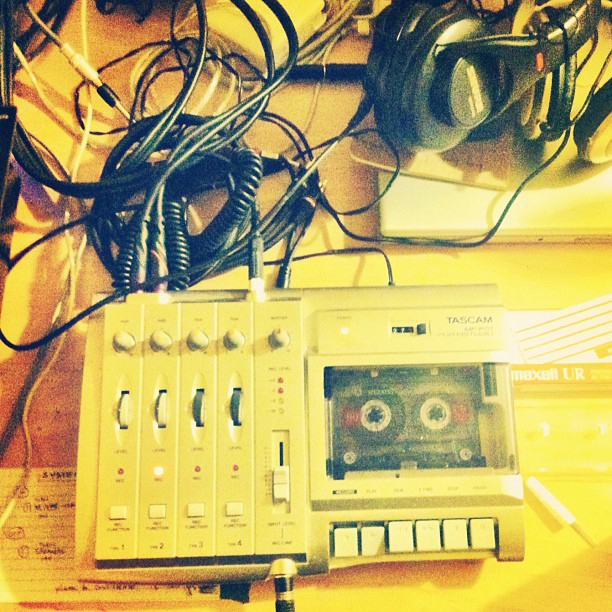 Radere is Carl Ritger who lives in Boulder, Colorado, and is part of the group of people who manage Communikey, the great arts festival that celebrates its fifth anniversary this coming week. (It runs April 25th through 29th, and this year features Laurie Anderson, Tim Hecker, and Morton Subotnick, among many others — I should have an interview with Subotnick published in advance of the event.) Somehow, in the midst of getting Communikey together, Radere still manages to record music, which would be a fine example of the old maxim “If you want something done, give it to a busy person,” except of course when it comes to making music, the only person really putting pressure on Ritger is Ritger himself. The recent track “04.07.2012: Tape Drift Session” shows no sign of pressure, in that it is as blissful as could be.

Then again, that bliss has a functional purpose, so perhaps there is evidence of pressure, in the form of sonic self-medication. In either case, it’s a lovely 20-plus-minute piece of glisten and pluck, of sheer, warm drone that cycles round and round, occasionally propelled by a light ping of a guitar string. The photo above is of Ritger’s setup, and this is his brief description of what he’s up to:

Last week, I dusted off an old four-track tape machine that had been given to me by a friend. After reacquainting myself with the unit’s basic controls — and battling some rather finicky output jacks — I managed to lay down some noise during a late night session. This is the first of what I hope to be many more tape-based recordings made over the next few months. Recorded with guitar, pedals and laptop.

The listener comments to the track allow him to further explain his process. In response to a query “blurred by the magnetic materials?” he responded “Only ever so slightly…I was actually really surprised by the fidelity of the tape.” And he clarified that there was additional, digital manipulation: “Yes. I tracked to tape, then bounced each of the tracks to Ableton,” the popular software platform. “I confess that I did some ‘in the box’ EQing and added some reverb, but the original recordings were really quite clean…especially for such a cheap box!”

The date and the word “session” in the track’s title suggest this is both a sketch of a track and a sketch of things to come. (And as such, it’s a solid example of music as ephemera, of the way SoundCloud has encouraged musicians to post not just final works, but works-in-progress, something I wrote about at some length this past week.) In the comments, he confirms that he has more such tape experiments ahead: “Definitely! Just bought a whole new stack of cassettes. Will be using these for the foundations of a bunch of new solo work.”