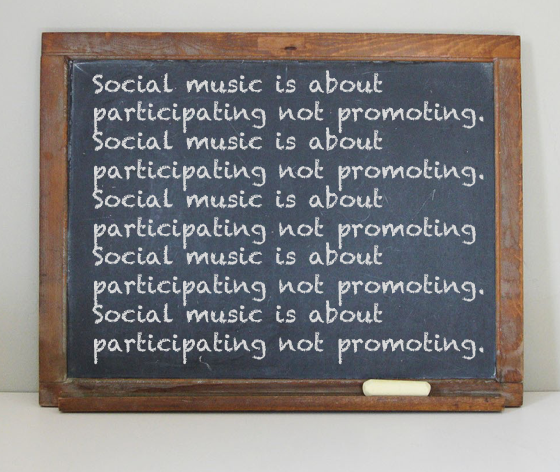 The great website newmusicbox.org, for which I’ve done some writing in the past, invited me to put together a SoundCloud primer, and it was a welcome opportunity. Titled “The Procedural Hows and Theoretical Whys of SoundCloud.com,” the piece is as that suggests a mix of basic steps on employing SoundCloud to host one’s music, and some more contextual/philosophical considerations of why SoundCloud functions as it does. The how-to section is straightforward, and the opening section is a lengthy overview the history of failures and attendant anxieties in relation to music hosting. These next three graphs are the among more exploratory, and so I post them as a window into the piece, which I hope people will find useful. The main idea is to emphasize that social music is about participating not promoting:

Step 6: Dig in. There is far more you can do on SoundCloud. The coverage above is intended simply as an introduction. For example, you can create Sets of tracks that provide additional context. You can join Groups, which in addition to collating tracks by some semblance of shared cultural activity (field recordings, serialism, toy piano) provide for discussion beyond the confines of a single recording. There are Soundcloud apps that allow you to do additional things with and to your tracks. Everything described above is free, albeit with a space limit on data storage, but you can elect to pay for a premium account and access additional resources. (The limits to SoundCloud are worth noting. For one thing, this is all “fixed recordings.”If you specialize in algorithmic music, you’ll be posting finished recordings, not live generative sound. Also, SoundCloud is a business, and as such monitors what is posted; it is especially attentive to copyright violation, so if you tend toward the aggressively plunderphonic, be prepared to have your track removed—or your entire account for that matter.)

Step 7: Make it new. The structure of SoundCloud suggests itself as a neutral space. In many ways, it has defined itself as the anti-MySpace. Where MySpace became overloaded with design elements, SoundCloud keeps it simple. This simplicity suggests SoundCloud less as a place and more as a form of infrastructure—if MySpace was a city that never slept, SoundCloud is the Department of Public Works. Its elegant tool sets provide structure but don’t define or fully constrain activity. For the more adventurous participants, SoundCloud is itself a form to be played with. Some musicians have used the “timed comments,”for example, to annotate their work as it proceeds. Others have fun with the images associated with their tracks, posting sheet music or workspace images. Some create multiple accounts for different personas or projects. Others have used the limited personalization options to colorize the embeddable player and make it look seamless within their own websites and blogs.

It’s arguable that the most productive users of SoundCloud recognize the fluid nature of the service and post not only completed works, but works in progress. They upload sketches and rough drafts and rehearsals: this keeps their timeline freshly updated, helps excuse the relatively low fidelity of streaming sound, and further invites communication with listeners—many of who are fellow musicians themselves.

In response to a subsequent comment on the article, I realized that the first time I ever employed the SoundCloud embedded player was February 17, 2009. That was a big step for me, because I had been wary of embeddable players, as is the commenter on my post. My hesitance remains, but I have, clearly, been more actively engaged with them. My general sense is that anxiety about whether those embeds might some day go down are rooted in a pre”“digital era concern about fixed recordings. The thing that makes SoundCloud tick — and tick more loudly, I’d argue, than Bandcamp, a peer service — is that it jettisons the album model, or certainly subsumes it dramatically, in favor of a largely chronological feed of audio. The interface comes close to acknowledging that the tracks are in many ways closer to ephemera than, say, to a compact disc. I’m not saying that is the end of the story, or even a good thing. I am saying that it is closer to how people consume music these days, in a digital era, than most other tools allow, and that proximity between interface and habit is a subtle cause of SoundCloud’s success.

The main reason I was grateful for the opportunity is that the readership at SoundCloud is comprised primarily of musicians, notably of composer-musicians, and the means by which musicians communicate, and use music to communicate, has been an increasingly important focus for me.

Another reason was that part of the purpose of the piece was to provide tools to participants in the site’s new “Sound Ideas” projects, which are not disimilar to the Disquiet Junto series I have been running on SoundCloud. This is what newmusicbox.org’s Molly Sheridan had to say about “Sound Ideas” when it first launched:

The concept is this: We’re going to ask you—yes you, sitting there, reading this post—to create music and share it. And the “we”isn’t just anyone, either. It’s John Luther Adams, Sarah Kirkland Snider, Sxip Shirey, and Ken Ueno.

Once a week we’ll post a prompt from each of these four composers which they’ve crafted to inspire sonic creation. If the idea resonates with you, write, record, invent or otherwise draft something new using any method that suits your style and skills, then share it in comments. You can embed a SoundCloud player, a YouTube video, a link to a score file—whatever works.

Here at NewMusicBox, we talk about music a lot. This project is our way of shifting focus and actually making some music, too. We can’t wait to hear what everyone creates.

That shift that Sheridan describes registers with me, in light of the Disquiet-commissioned projects I’ve been working at here.