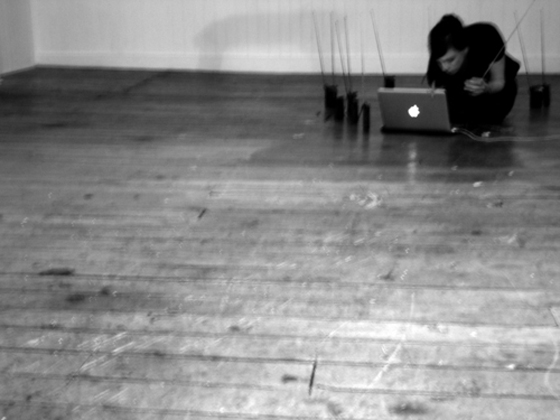 The work is titled “dear friends who have died are all talking to me tonight / all at once” and it is credited to Radio Cegeste, which is in fact one Sally Ann McIntyre. McIntyre lives of Dunedin, New Zealand, and Cegeste is her working with a small battery of portable FM radios. The radios, in turn, work in collusion with each other in a small space, in this case in Dunedin gallery, to create a fractured sonic hologram of social activity.

McIntyre is working from a rich theoretical construct, which Radius presents along with the audio on its respective pages at tumblr.com and soundcloud.com. This is an except:

As a site-specific, spectator-less, solo performance, dear friends who have died are all talking to me tonight / all at once re-constructs and re-imagines personal and public memory through the medium of transmission, as an appropriate framework for uncertain, shifting structural and social realities. Small clusters of radio receivers, constantly shifted around the space, pick up the signal from a stationary mini FM transmitter. These receivers also engage with each other, chattering and heterodyning, becoming analogous to groups of people talking, and the social space of a gallery opening. Such chatter interjects the night airwaves of Dunedin, full of noise, clashing frequencies, and etheric vocal infiltrations, into what is usually perceived as the bounded space, silence and temporal amnesia of the ”˜white cube’.

More on Radio Cegeste and Sally Ann McIntyre at radiocegeste.blogspot.com.