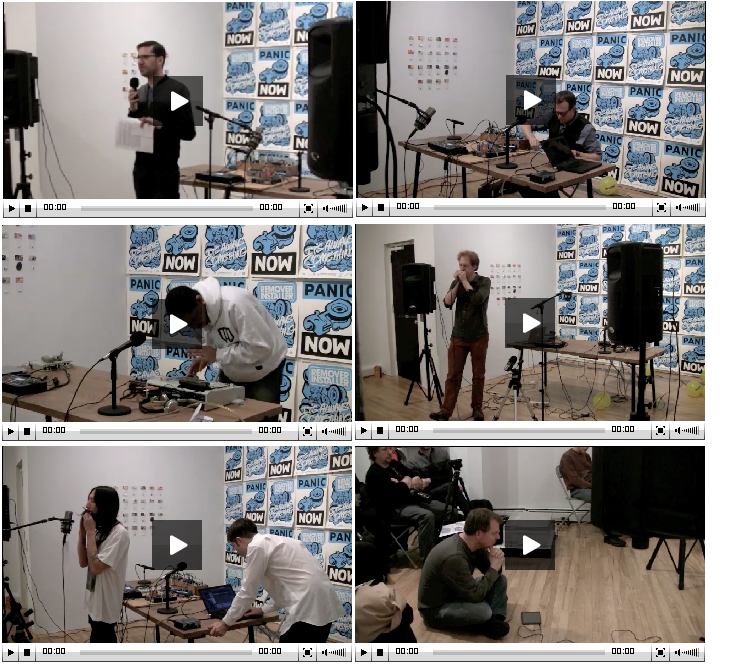 This past November, on the first Tuesday after Thanksgiving, the fourth Disquiet Junto concert of 2012 was held at the gallery apexart in Manhattan. (The previous three were in Chicago in April, Denver in August, and then San Francisco the week after the apexart show.) Six musicians each performed two works. They did a piece they wanted to share with the audience and each other, and they did a piece that correlated with the apexart exhibit “As Real As It Gets,” which was organized by Rob Walker. Walker had invited the Disquiet Junto to provide the installation score to the exhibit, a vast expanse of sound that came about over the course of several Junto projects.

The musicians at the apexart event were Arcka (Shawn Kelly), Brian Biggs, Ethan Hein, Kenneth Kirschner, Tom Moody, and Roddy Schrock (Schrock was joined for his non-Junto piece by Joon Oluchi Lee). Videos of the five of the six performances, as well as of my rambling introductory comments (I was in town from San Francisco), are streaming and downloadable at apexart.org. Moody, whose video isn’t available, has posted at tommoody.us audio that was featured in his set.

The project for the evening involved making music made from the sound of field recordings of large-scale retail spaces, and that music was intended to approximate the mechanistic fury inherent in Zola’s novel Au Bonheur des Dames (1883), which was a touchstone for the overall exhibit. More on the exhibit and event at Walker’s designobserver.com column and here, and at apexart.org. Over at bldgblog.blogspot.com, Geoff Manaugh wrote some kind words in advance of the concert.