â—¼ Power Station: Fascinating piece at bbc.co.uk on how forensic police detection can use the ~50Hz hum of the power grid as a date/time-stamp for confirming legitimacy of audio evidence:

This buzz is an annoyance for sound engineers trying to make the highest quality recordings. But for forensic experts, it has turned out to be an invaluable tool in the fight against crime.

While the frequency of the electricity supplied by the national grid is about 50Hz, if you look at it over time, you can see minute fluctuations in the order of a few thousandths of a hertz.

â—¼ Italo Horror: Trailer for Berberian Sound Studio, directed by Peter Strickland, about a sound engineer employed by an Italian horror-film studio (thanks for the tip, apeshot.tumblr.com). The score is by Broadcast (guardian.co.uk):

â—¼ Junto Records: A lot of Disquiet Junto folks involved in the weekly creative-restraint music projects have made sets on SoundCloud of their efforts, such as Carlos Russell (carlosrussell.bandcamp.com), but Grzegorz Bojanek, with Constraints, goes the step further with a physical release. Here’s a shot of the cover being printed: 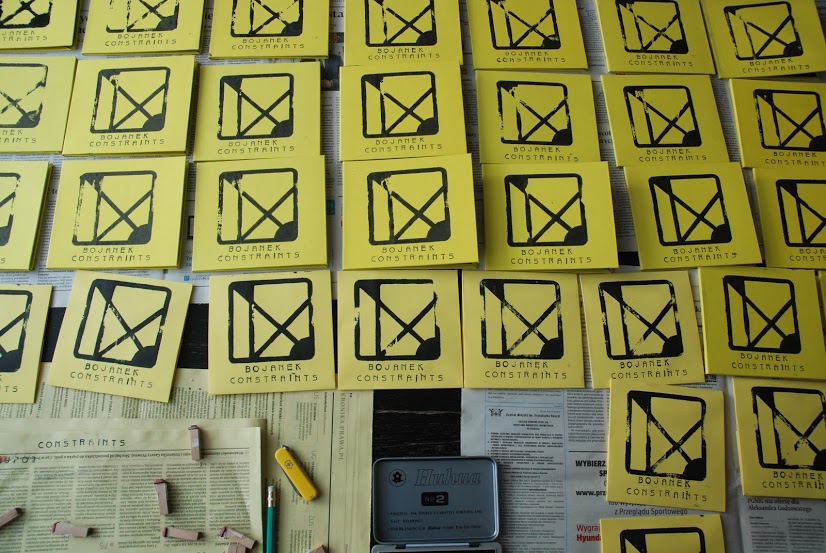 You can soon order Constraints in digital and/or physical form here: etalabel.bandcamp.com.

â—¼ Ava Moderne: Great interview with guitarist Ava Mendoza (by Michael Ross) at guitarmoderne.com. The Nels in this quote from her is Nels Cline:

Nels’ playing when I was a teenager sort of helped me understand that classical-esque guitar playing, shreddy solos, and walls of noise were not necessarily unrelated and could actually be good friends

â—¼ Sound URL: Visit artsy.net, which recently switched URLs from art.sy, the .sy suffix originating in Syria and reportedly causing some issues (techcrunch.com). The site’s “sound” coverage has slowly expanded, though it still has only two artists listed under “sound art.”

â—¼ De-Coding: SoundCloud’s API is among those now part of Codecademy’s lesson plans (fastcompany.com and codecademy.com, via dianakimball.com).

â—¼ Sonic Weapons: The sound of war, as described by the BBC’s Vanessa Barford:

“A major sound of war is the sound of white noise. If you are a commando, it’s always in your ear, and every base location or operations room has that crackle of radios,” says Godfrey.

[Patrick] Hennessey cites the “whirl of generators” as another constant at modern patrol bases, while in a “surreal juxtaposition”, whatever is playing on MTV can become a soundtrack to a war.

Presumably that bit about MTV is meant in anecdotal or associative terms, since what’s playing on MTV these days, and for some time, has been anything but music. (Godfrey is Amyas Godfrey, “an associate fellow at the Royal United Services Institute.” Hennessey is described as “an author and former captain in the Grenadier Guards.”) The article as it appears online is packed with example audio-video recordings.

In Gaza, correspondents have described the whine of Israeli drones overhead. In Arabic they’re known as “Zananna”, literally “whining child”.

It’s received just one comment: “With this you run the loss of science data in the images. That is not what the NASA website is about.” That person should read “Shhhh. Listen to the Data” in the May 2012 physicstoday.org, about Wanda DÃ­az-Merced’s xSonify:

“When I get the data, I convert it to sounds. I can listen for harmonics, melodies, relative high- and low-frequency ranges,”she says. With NASA’s Swift satellite, for example, DÃ­az-Merced “was able to hear [previously overlooked] very low frequencies from gamma-ray bursts. I had been listening to the time series and said to the physicists in charge, ”˜Let’s listen to the power spectra.’”

(The xSonify project was covered here back in May of last year.)

â—¼ Art Worlds: My friend Raman Frey has started a new blog. In a recent post, he pondered where art is headed in our brave, still new-ish world of networked, geographically disperse, lightly overlapping micro-communities. I weighed in with a comment about how the art world is different from, for example, the music industry and the journalism trade: ramanfrey.com. In part:

One key difference is that music and journalism, again just to take two examples, didn’t really court digital media as a subject to anything remotely resembling the extent that the art world did. In a way this helps, because the art world has a library of jargon and learning at hand about understanding digital media. In another way, it makes the transition all the more difficult, because after how many years — what, it’s been 40-plus since Jasia Reichardt’s The Computer in Art, just to suggest one milestone — the art world less than other worlds can’t claim ignorance to the generational forces at work. It can’t, like the flailing business known as publishing, just say, “Well, this is how we’ve been doing things for so long,”because part of what the art world has been doing for so long is embracing, exploring, and promoting digital media.

â—¼ App Yap: This is a bit of a tangent, but I have a new phone, as of one month ago. It’s my third Android phone in a row. I spent about two years with the G1, then about two years with the Samsung Galaxy S (aka the Vibrant), and now I begin life with the Nexus 4. So far, my one-word review is: Wow. My main disappointment is the report that Jelly Bean, the 4.2.1 version of which resides on my phone, has given up on USB On-The-Go, which allowed Android devices to connect with USB devices like keyboards, mice, and thumb drives. As for apps, my main task-oriented software is: the stock email (K9, an alternate, for the moment seems unnecessary), HootSuite (for Twitter and Facebook posts, and potentially Google+ if I can get the time to set up a proper page), OfficeSuite (for formal document writing) and Epistle (for .txt, which is my primary medium for writing), FBReader (for DRM-free ePubs — plus OverDrive for library ebooks, and the Kindle and Google Play Books apps; I wish they’d all adopt the “scroll” reading mode recently introduced in Apple’s iBooks app), Dropbox and (Google) Drive (for storage), and Google Reader. And I’ve begun fiddling with iDisplay, which like AirDisplay lets you use your phone (or tablet) as a second screen to your laptop/desktop — and, better than AirDisplay, it works via USB in addition to wifi. (By “task-oriented” software, I mean that I am not counting things like the dedicated reader for theverge.com, or the Instagram app, or games and music/sound-making software.) One reason I stick with Android over iOS for my phone is the widgets — I have an iPad and an iPod Touch, and there’s something disorienting about the expansive grid of app icons that makes me feel like a hungry person walking into a supermarket: “Er, which first?” As for me, I prefer how Android lets me view information, and to update information, front and center. I rely on the stock calendar widget, on a “sticky notes” variant called seNotes Plus (which combined with the Jelly Bean voice-to-text software is pretty killer), and on the stock Reader widget (to keep me up to date on a handful of priority RSS feeds). Other widget favorites: Easy Voice Recorder, Extended Controls (which lets me set up one-touch things like screen dimming, screen always-on, screen lock, battery level, and so forth). Also: Ultimate Rotation Control, which among other things lets you set the homescreen/desktop of your phone to landscape mode. That about covers it. My needs are fairly minimal. If you use Android and have any favorite apps or gear, let me know.