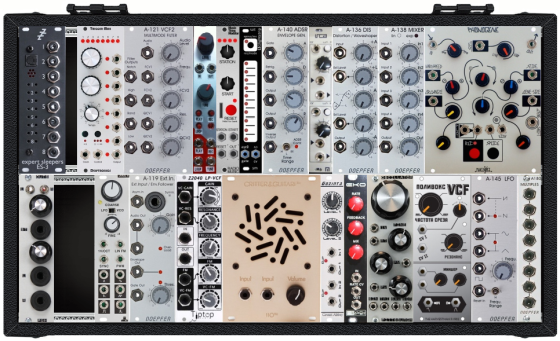 You’re working at your modular synthesizer. It’s nothing particularly technical, what you’re up to. There’s an oscillator that emits a variety of waves: sine, saw, triangle, and so forth. You patch the oscillator into a filter, and the filter into a mixer, and the mixer into a speaker. It’s one straight channel. Its buzzes, sonorously, at least to your ears. Then you patch another, slower-moving oscillator into the filter as well. This secondary source makes the filter all the more complex, though in the end it’s just tweaking one source wave. It has texture. It moves back and forth. It grows and swells. Then you turn on the sequencer, and let its syncopated triggers send pings through the system. As time passes, you move things around, doubling and tripling the variations on that original source signal. You slow one oscillator, and then you change the waveform sent from another. You let the filter cut off one range of the spectrum, and then another. You pitch the tempo of the sequencer slower, and slower still. You adjust the balance between a handful of cables now routed through the mixer. The sequencer is being fed into plugs for which it was not entirely intended, and yet the end result is exactly what you’d hoped for, a burr-like beat that’s like an occasional metronomic absence in the soft, noisy wave. You’re learning as you go. And then you look back at the filter, and something is odd. There is nothing at the moment plugged into its “Audio In” jack. There is no source audio. At some point you’d removed that cable, and the speaker has yielded no sign of that absence. There should be no sound at all, except perhaps those sequencer blips. There is, technically, no source audio for what is happening in your synthesizer. Somehow, though, in this largely analog modular setup, the electric hum has taken on a presence of its own. There is a ghost oscillation caught in a signal loop. At some point you’ll need to turn off the machine, but for the time being you listen to the beading hum, ponder the phantom waveform, and marvel at the small dark hole in that empty jack.

The current stage of my rig is pictured above, and an occasionally updated system view is at modulargrid.net.