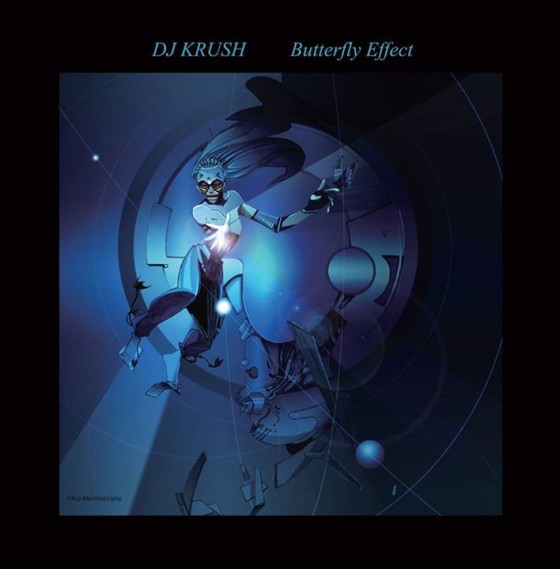 Now, 45 seconds isn’t much on which to judge a track, let alone a record. But it’s been over a decade since DJ Krush released an original full-length studio album, 2004’s å¯‚ -Jaku-, so we’ll take what we can get. A full three years since he last updated his SoundCloud page (soundcloud.com/dj-krush-official) comes a pair of samples from the forthcoming Butterfly Effect.

The lounge-friendly, self-forwardly romantic “Future Correction” is on the more populist end of Krush’s approach to hip-hop/soul production: steady beat, lilting piano, shimmery washes of sound. It’s very much W Hotel lobby music, but a dramatic fissure early on suggests some promise, as do stereoscopic effects and the way that piano at times pierces the background-music veil and risks irritating the ear at a high register.

The real treat is the far more muddy, dire, and percussively inventive “Probability.” I played this on loop for an hour shortly after Krush announced the upload on his Facebook page. At first the track is marked primarily by the fundamental loping beat common to downtempo instrumental hip-hop. But on repeat listens, so much emerges from the darkness: deep glottal chanting, castanet-like finger snaps, backward-masked sweeps of nervous sound, deliciously peculiar sonic squiggles, and many more delectable little touches. After an 11-year lull, the sheer detail of “Probability” is proof that DJ Krush has, in fact, been very, very busy in the recording studio.

Butterfly Effect is due out September 26. “Probability” segment originally posted at soundcloud.com/dj-krush-official. More from Krush at his official page, sus81.jp/djkrush. Bonus: the album cover is by accomplished anime director Koji Morimoto, who cut his teeth on Akira.