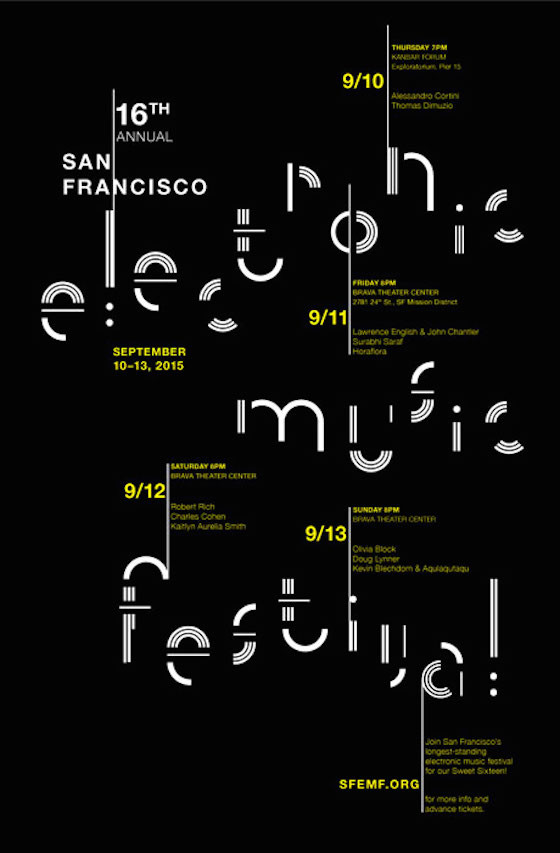 I made it to three of the four nights of this year’s San Francisco Music Festival. It’s been running since 2000, and I think I’ve attended every year since I moved back to San Francisco from New Orleans in 2003, with the exception of 2010, when it coincided with the birth of my little kiddo, who decided to arrive two weeks early. This means I’ve managed to miss out on Alessandro Cortini twice: he played the 2010 show and he had to drop out of this year’s opening-night event due to a family emergency.

As always, SFEMF, which ran from September 10 through 13, was admirably style-agnostic except to the extent that it remains pop-antagonistic. The performances included a comical theatric mini-opera by Kevin Blechdom and Aqulaqutaqu, a full-on ambient-industrial immersion by Lawrence English, a percussive live score to a short film by Surabhi Saraf, a modular synthesizer set by Doug Lynner (using the first commercial Serge, which dates from the mid-1970s), and a four-channel “film-less film” by Olivia Block. English’s performance was about as “pop” as it got, because his smoke-machine aura and booming minimalism might also be at home in a handful of adventurous techno clubs.

And as always there was at least one elder statesman. This year it was the improviser Charles Cohen, who played twice — on Saturday (the night I missed) and on the opening night, in a makeshift, last-minute synthesizer duo with Wobbly (Jon Leidecker), to fill the hole left by Cortini’s absence. Because I missed the Cohen show on Saturday, I also missed Robert Rich and Kaitlyn Aurelia Smith. Rich is arguably an elder spokesman of sorts, too, because even though he was born in 1965, he started releasing music in his teens, and gained prominence early on.

Thursday I got to see Thomas Dimuzio put a massive amount of modular synthesizer gear toward an admirably minimal, often microsonic, goal. Friday I caught English and Saraf (the latter of whose video of an especially louche pharmaceutical production line seemed to have some technical issues), and opening act Horaflora (Raub Roy), who used massive, slowly deflating balloons as audio sources and tactile triggers. And on the closing night, Sunday, I caught Blechdom’s antic interstellar opera, during which she managed to have a slide projected for every single word in the libretto and many additional syllables, as well as sets by Block and Lynner.

Lawrence English and Olivia Block arguably performed the most memorable sets of the three nights I was in attendance. Everyone on the festival bill was experienced and unique — SFEMF is no slouch in its curatorial efforts — but the English and Block sets were the two that seemed to fully consume the space. (Note: there were two spaces. The first night was at the Exploratorium, and the remaining three nights at the Brava Theater.) English’s was a throbbing white noise of dense drama. Block’s was an ever-shifting collage of sonic elements with an underlying through-composed, narrative sensibility. It isn’t that a set has to surround the listener to make an impression, but this year saturated listening made the most sense as concert music. A lot of this has nothing to do with the other performers in particular, and almost everything to do with concerts in general. I go through phases in and out of love with live performance of experimental music, and there’s an extent these days where shows of experimental concert music (seated, reflective) can feel a bit like going to the movies. Movies have been undone by television, and while live concerts don’t have a direct parallel challenger, there are times when the purpose remains equally unclear. After a movie, you walk out of the theater wondering what the point is — why, unlike with television, can’t you see the characters again, witness their continued development. Experimental concerts also often fail to fulfill a specific desire. One thing that surprises me regularly at shows is that there is no time set aside for explanation. Even major symphonies regularly schedule pre-concert discussions by the conductor and sometimes the principal soloist. The term “experimental music” can fall short for what’s been undertaken. It’s really interrogative music. It’s experimental because it’s intended to go places no one has gone before, but in doing so it is, like anything experimental, trying to find answers to questions: does this idea work, does this sound register with an audience, is this technology stage-ready, does this music cohere? Likewise, the audience has questions, too. I don’t think it would undermine a concert were the musician, if so inclined, to take a moment to talk about what was about to happen, or what had just happened.

I do also wonder if SFEMF would to well to add a night at a third venue of more populist work — a place where dance-friendly, or at least head-bobbing, music by Monolake or Amon Tobin or the like would be at home.

Anyhow, it was a great year for SFEMF, and I’m looking forward to next year’s festival — right after my kiddo’s sixth birthday.

This first appeared in the September 15, 2015, edition of the free Disquiet “This Week in Sound”email newsletter: tinyletter.com/disquiet.