Report from the (Real) Future (Fair)

A few hundred people listen to the Junto with their eyes closed – plus clairaudient journalism (Nov 6-7, 2015) 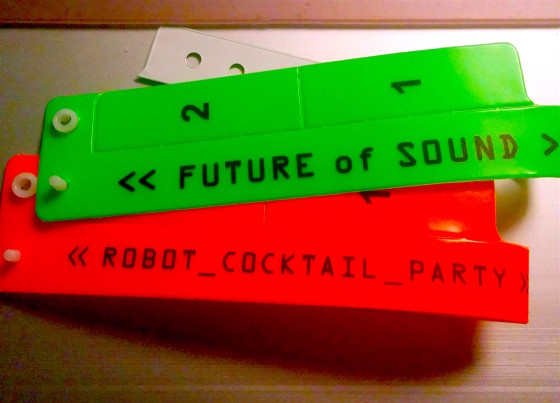 As you can perhaps deduce from the unused drink tickets that remain attached to these two wristbands, I had a pretty debilitating head cold during the Real Future Fair in San Francisco on November 6 and 7. I did, though, have the great opportunity to share the fruits and nearly four-year history of the Disquiet Junto in a short presentation during the Fair’s closing night “Future of Sound” event.

This appearance meant, among other things, sharing a bill with soul-pop figure Kelela, Hrishikesh Hirway of the Song Exploder podcast, San Francisco electronic musician Pamela Z, and performance artist Dia Dear, as well as a bunch of journalists from Real Future and its parent media organization, fusion.net. Head cold or not, that was pretty grand.

Some quick highlights of the Fair:

— Alexis Madrigal, editor-in-chief of fusion.net, did me the favor of interviewing me for the Junto presentation. I like talking in front of crowds, and I like a public discussion all the more. Madrigal did a great job of summing up what the Junto is, and if I get my hands on the audio I’m going to transcribe it for future (not just Real Future) use.

— Madrigal has a particular sense of how the sounds emitted from Junto projects are interestingly apart from what is generally considered music. This perspective is something that I can, frankly, lose track of since I spend much of my listening time inside the drone bubble. (I did take the opportunity to mention that one of my favorite Junto projects played with the idea of a song, using the room tone of three different places to flesh out the verse, chorus, and bridge of a “song.”)

— My favorite moment of the live Junto event was when Madrigal had the entire audience close their eyes for 30 seconds and just listen to the final of the Junto tracks we prepared. Me? I kept my eyes open to take it in.

— The Junto project we shared with the Real Future audience is the current one, number 201, in which we: “Encapsulate an album for efficient yet meaningful consumption.” The idea is that in the future, among the many problems of overpopulation and the resulting leisure time provided by the robotization of work is that way more art is being produced. So, how do we, as humans, consume it — not to mention the vast back catalog of novels, music, video games, etc.? In addition to some very interesting sonic processing, this Junto project has led to some fun short-form science fiction in the liner notes to the various tracks. We’ve compressed two different albums in the course of the project, self-titled records by the French group Salmo and the New Zealand duo Montano. For the Real Future event I played a few tracks off the Montano album for context, and then three of the Junto reworkings: from Australia-based Tuonela, Tokyo-based Hiroyuki Kuromiya, and, closer to home, Erik Kuehnl of Berkeley.

— In addition to the folks I mentioned up top, there was some interesting live journalism. Kashmir Hill talked about the “real world mute button” being developed at Doppler Labs. Hill also did a great job the day prior moderating a panel about the future of surveillance.

— Kevin Roose gave a funny talk on vocaloids, in particular Hatsune Miku (who made a guest appearance in the Red Bull Music Academy comic on synthesizer legend Tomita that I edited, with Hideki Egami, last year).

— There was a short video from Daniela Hernandez on LRAD sound weapons.

— Kristen V. Brown reported on an outlier in the field of performance-venue acoustics.

— And there was a report on sonic healing that balanced skepticism with inquiry, but I didn’t catch the name of the reporter.

— One great thing that the Real Future producers did was hire Marc Kate to “live score” the event. Of course, he didn’t live score my session, since I was providing the music, but in all the reports he, in real time, summoned up audio to augment the narrative.

— The headliner of the show was Kelela, who is very much of the soul-pop realm in whose context the idea of much Junto work being “musical” to a general audience can be a complicated sell. I didn’t stay for her performance (#headcold) but I greatly enjoyed the interview that Hrishikesh Hirway of the Song Exploder podcast did with her at the start of the evening, talking about the recording of one of her songs. She discussed various aspects of her process, including working with producers, reworking provided instrumental tracks, singing first in vocalese before filling in the vowels and consonants and spaces with actual words. (I also missed Pamela Z.) One great thing about Hirway’s Song Exploder is how the musicians among its listenership are being encouraged, if not outright trained, to speak analytically about how they do what they do. Historically, this has not been a strongpoint of pop-music journalism, excepting technology/instrument-specific reporting in magazines like Guitar Player.

More details on the event: realfuturefair.com. Major thanks to Alexis Madrigal and Cara Rose DeFabio. Check out the website at fusion.net, and definitely subscribe to Madrigal’s Real Future newsletter at tinyletter.com/realfuture.