RJDJ Return: This video is just a tease, but it’s a promising one. The makers of the RJDJ augmented-reality audio app have a new app in the works, named Hear, that processes everyday sounds through filters. There’s been much talk of an “Instagram for sound.” This has a sense of that wish being fulfilled. Video found via Ashley Elsdon’s palmsounds.net. (Post-script: since this note first appeared in the This Week in Sound email newsletter, the app has gone live on iTunes’s App Store. Unfortunately the app is not, for the time being, compatible with my fifth-generation iPod Touch, so I haven’t had a chance to use it yet.)

Sound Studies: Geeta Dayal interviewed Mouse on Mars’ Jan St. Werner, who is teaching a course at MIT called “Introduction to Sound Creations.” Says St. Werner, “I think it’s great that the visual-art world has embraced sound more, but there is the risk of that becoming a novelty. There’s also a great chance for sound, to see it as its own art form. It doesn’t need anything that makes it agreeable. That’s the great opportunity we see at the moment.” 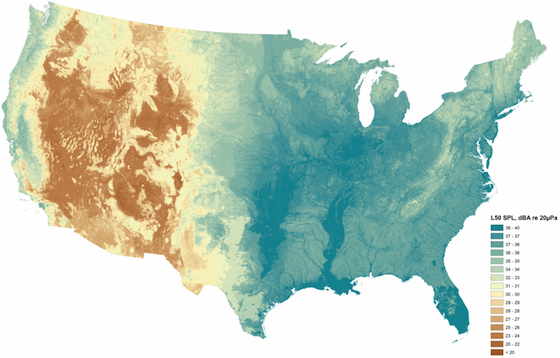 Mapping Silence: At the Washington Post, Christopher Ingraham writes about a map commissioned last year by the National Park Service “of what the United States would sound like if you were to remove all traces of human activity from the picture,” pictured above. (Via Steve Ashby)

Wainwright Syndrome: Slightly removed from sound, though as always sound is vibration so buzzing is sound, and phones buzzing are doubly sound since the buzz is a stand-in for a ring(tone): at nymag.com, Cari Romm writes about phantom phone vibrations: “These imagined sounds and sensations are examples of pareidolia, the phenomenon of perceiving a pattern within randomness where no pattern exists (seeing the man on the moon, for example, or hearing satanic messages in a record played backwards). For this particular pareidolia, there are a few things that make some people more susceptible than others.”

Always On: As someone who is rarely a foot from his phone, I still find the voice activation aspect of phones alarming in a privacy sense, but Google keeps upping the ante: “Google Announces Voice Access Beta—Control Your Phone Completely by Voice” (androidpolice.com).

Pre-Acoustic: If you’re near University of Copenhagen, there’s an interesting symposium happening there in two days, on April 21: “The field of sound studies often gets restricted to sound practices, listening experiences and auditory dispositives after the advent of modern acoustics, established as an academic subdiscipline of physics in the 19th century. Yet unsurprisingly, auditory knowledge was present and impactful in cultures of the middle ages, the renaissance, and early enlightenment”: soundstudieslab.org.

Spotify Protip: Since I’ve been on and off tracking my use of Spotify (following the demise of the Rdio service), here’s a Spotify protip. If you’re having issues with the offline sync (which lets you store tracks or albums on a device, as I do on my iPod Touch, which is the primary way I use Spotify), the issue may be that you have too many devices associated with your account. I had four. Once I reduced it to three everything worked fine.

This first appeared, in slightly different form, in the April 19, 2016 (it went out a day late), edition of the free Disquiet “This Week in Sound”email newsletter: tinyletter.com/disquiet.