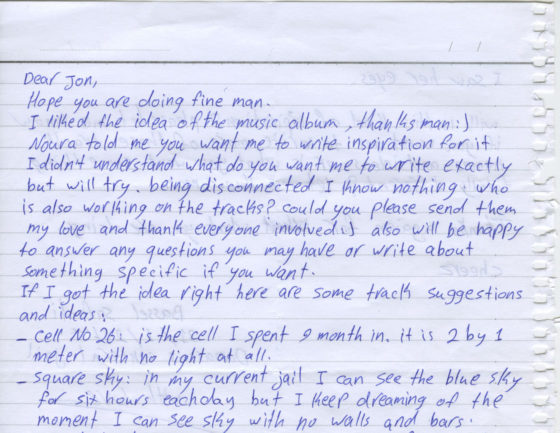 Each Thursday in the Disquiet Junto group, a new compositional challenge is set before the group’s members, who then have just over four days to upload a track in response to the assignment. Membership in the Junto is open: just join and participate. A SoundCloud account is helpful but not required. There’s no pressure to do every project. It’s weekly so that you know it’s there, every Thursday through Monday, when you have the time.

Step 1: Familiarize yourself with Bassel Khartabil. This coming Wednesday, March 15, 2017, will mark the fifth anniversary of open-source software engineer Bassel’s March 15, 2012, detention in Syria. It’s been more than a year since anyone has heard from him. Three times in the past the Disquiet Junto has done projects to raise consciousness about his predicament. We did the first one in January 2014, creating a soundscape to go with Bassel’s CGI reproduction of the ancient city of Palmyra:

We did a second one, “Placid Cell,” in March 2015, marking the third anniversary of his incarceration:

And in November 2015 we created audiobook chapters from a book, Cost of Freedom: A Collective Inquiry, written in Bassel’s honor:

Step 2: On January 31, 2014, Bassel wrote to his friend Jon Phillips from the Damascus Central Jail in response to Phillips’ suggestion that people might make a record album inspired by his ongoing incarceration. Bassel replied in part:

The Noura mentioned in the letter is Bassel’s wife. See the full letter and information about actions to mark the fifth anniversary at:

Step 3: Take that section of a “square sky” to heart, about being able “to see the blue sky for six hours each day.”

Step 4: Create a short piece of music in response to that image, that scenario, that mix of hope amid hopelessness.

Step 1: If you hosting platform allows for tags, be sure to include the project tag “disquiet0271” (no spaces) in the name of your track. If you’re posting on SoundCloud in particular, this is essential to my locating the tracks and creating a playlist of them.

Step 3: In the following discussion thread at llllllll.co please consider posting your track:

Length: The length of the finished piece is up to you. Three to five minutes feels about right.

Title/Tag: When posting your track, please include “disquiet0271” in the title of the track, and where applicable (on SoundCloud, for example) as a tag.

Download: Please set your track for download and with a license that allows for attributed reworking (i.e., a Creative Commons license permitting non-commercial sharing with attribution). That’s in accordance with the “share alike”aspect of the first stage of this project.

Linking: When posting the track online, please be sure to include this information, as well as the identity of the source track that yours accompanies:

Image associated with this project is a detail that Bassel Khartabil wrote to Jon Phillips on January 31, 2014, from the Damascus Central Jail. More on Bassell’s detention at freebassel.org. Major thanks to Christopher Adams, Niki Korth, Jon Phillips, and Barry Threw. See the full letter and information about actions to mark the fifth anniversary at: