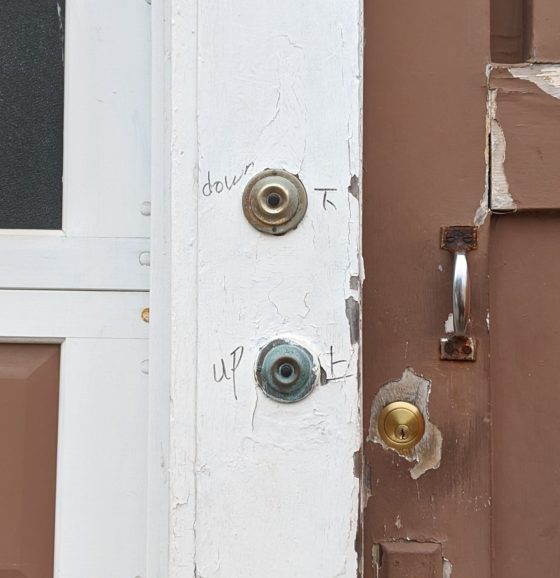 Riddle me this: When is up down and down up? One answer that I hadn’t previously considered: When someone didn’t take the time to properly sort out the wiring of a pair of doorbells on a small multi-unit residence.

Judging by the relative wear on the metal and the paint overlay seen here, it’s likely that the lower button is the original and that the top button was added during a subdivision at some point. Swapping the natural correlative locations of the buttons certainly wasn’t anyone’s purposeful intention, so the handwritten corrections must have been an afterthought, like the subdivision itself.

It’s interesting that street addresses aren’t provided, just “down” and “up,” not A and B, or two consecutive numbers. Whoever visits this building is expected to know, in advance, who lives on the top floor, and who lives below. Visitors for whom Chinese is their primary language are provided a helpful translation in simplified characters. The simplification keeps the characters singular, but as a non-speaker I am left to wonder if they contain additional meaning. If nothing else, they fit the limited space better than less-simple Chinese would have, and clearly better than does the English, which here has been bent to fit the confines. What I also don’t know is if the Chinese lettering exhibits the limits of constraints that are evident in the English.

Then comes the question of which came first, the Chinese or the English. I like to think the Chinese was there first, and the new inhabitants deciphered the text, realized the benefit of the labels, and added an English translation thereof. Having moved to a predominantly Chinese neighborhood, the new tenants immediately had to learn some of the language. Alternately, perhaps the Chinese inhabitants came later, and were led to imagine that labeling apartments “down” and “up” was just what people here did, and they added their translation so as to follow the perceived local norms.