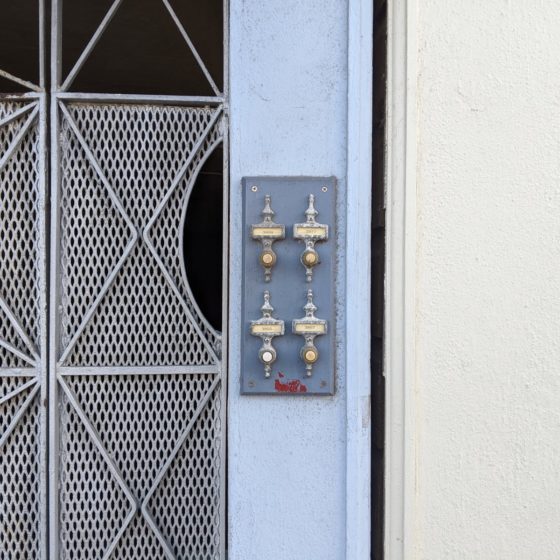 At some point — and judging by wear and tear, “some point” was a long time ago — one of two things happened. First: someone got a deal on these stately (or aspiring-to-stately) doorbells. Or second: that someone made a decision to add something perceived as classy to the front of this otherwise standard multi-unit building. These doorbell fixtures look less like a modular system, and more like individual devices intended for single residences. Perhaps there was a consideration in that regard. Perhaps the idea was to lend an aura of spacious suburban self-possession to the, in fact, close confines of urban apartment existence. There are at least three further stories to be tracked: What’s with that red paint at the bottom? Why is unit 3805’s button pristine in contrast with the three others. And why are the top two screws of the facade clean and bright, while the bottom two seem rusty and old? But those stories are overshadowed, so to speak, for to the right is a telling shadow: a dark, narrow, vertical gap provides stark evidence of just how close the next neighboring building is. The gap is a reminder that in a dense urban setting, even if you bring an illusory touch of the suburban to your own space, tight interpersonal proximity remains a fact of life.