The goal here was to push the Muxlicer by altering its clock as time passes. The clock is what sets the pace of the changes that you hear. The Muxlicer, from the manufacturer Befaco, is the module toward the upper right corner. It’s the one with all those red faders that go up and down. The way the Muxlicer works (in this scenario, for there are various others) is you put in one master audio line that is then spread across the eight stages, the relative volume of which are individually set according to those faders. And then you can slot in alternate audio in as many of those eight stages as you like. So, as the clock clicks through its paces, you hear each of the eight stages in sequence, with the alternate audio occasionally replacing the main audio, and the volume of each stage shifting as well.

I’ll get to the source audio itself in a moment, but first about that clock situation. Initially while patching this, I just had a steady clock coming from a trigger pulse from the Dixie II (manufactured by Intellijel). If you want to know what the Muxlicer’s clock pulse is, keep an eye on the rate of the little light toward the top of the Dixie II, which is the seventh module in from the left on the top row. To give the steady pace some vibrancy, I had another wave, a sine from the Batumi (from the manufacturer Xaoc), create a random-ish, ever-shifting sequence as to which of the eight Muxlicer outs would play at any given moment. So far, so good.

But I wanted to push the clock further. This effort came in two phases of the patch’s development. The next thing I did was feed a slow moving square wave from the Batumi into the pitch control of the Dixie II. This meant every time the Batumi wave was on, the pitch of the Dixie II would suddenly level up, meaning the clock signal sent to the Muxlicer would speed up. This worked well, but an interesting thing happened. Since the square wave initiated this change in regular increments, going back and forth, the change in speed of the Muxlicer fairly quickly came to feel rote. If, as Brian Eno said, repetition is a form of change, then this was an example of how change (the clock going from fast to slow to fast, round and round) became a form of repetition. Something needed to change, in other words, for this to feel less repetitive. Something else needed to make that change occur.

I should note that the square wave going into the pitch of the Dixie II is squashed in height a bit by the S.P.O., from the company Steady State Fate. Initially this decision was made in order for the change in clock pacing to not be too significant. But then something occurred to me: the S.P.O. can combine signals, so I put a second, more chaotic wave also into the S.P.O., meaning that every once in a while, the square wave affecting the speed of the clock out of the Dixie II would itself be altered with a rapid little uptick. As a result, the change in the rhythm evidenced by the Muxlicer became more complex. If you keep an eye on the Muxlicer, there are eight horizontal red lights just below the faders. Watch those, and you’ll see how the clock changes. Where that additional, chaotic wave form comes from is it’s an envelope from the Detect-Rx, which is following the volume of one of the bands coming out of the filter bank. Which is to say, there’s some chaos going into the clock, but at some level it is correlated with the sound of a Buddha Machine itself

There’s more going on regarding the audio inputs. The blue one is first generation, and the peculiar color is second generation. The blue one (with the green audio cable) is split, and half the signal goes into a filter bank while the other half goes into a granular synthesizer. Three bands come out of the filter bank. One goes into the main Muxlicer in, one into an alt-in, and one into an envelope follower (more later). The left channel of the output of the granular synthesizer also goes into the Muxlicer alts (twice). The right channel of the granular synthesizer goes into a second channel of the mixer. Its volume is then altered thanks to a square wave coming out of the Batumi. However, I wanted to find a complement to the sudden jerks (the shudder) of the clock, so I put a burst-like signal into the trigger of the granular synth. The signal is a square wave, the frequency of which is being altered by a different square wave, the frequency of which is itself being altered by a sine wave (all within the Batumi; I believe this is referred to as self-patching). If you look at the lights of the four red faders of the Batumi (fourth module in from the upper left), you’ll see when that rapid burst kicks in. And, of course, you’ll hear it.

Which leaves a question: where’s the second-generation Buddha Machine? It’s not heard here. A patch starts in one place, and ends in another. At some point I disconnected the second Buddha , was pleased with the result, and never patched it back in. I didn’t fully recognize this until I was done. 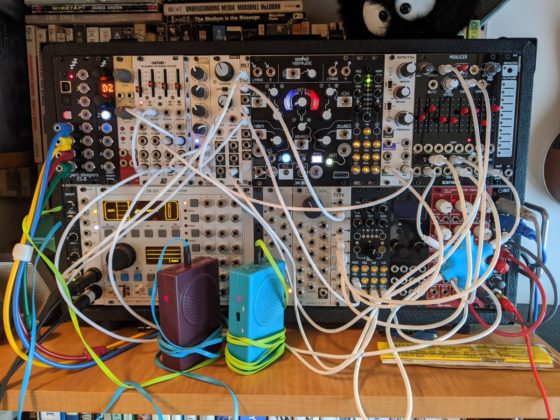