A lot of these Buddha Machine Variations have been static/semi-generative things that just proceed under their own power. This is, I think, only the second where I intrude and do something to initiate changes.

The source audio is a loop of a Philip Glass choral piece emanating from the edition of the Buddha Machine created by FM3 to commemorate the minimalist composer’s 80th birthday.

The first time through, the loop is heard on its own. The second time through, beginning at about 30 seconds in, what’s heard is two treatments of the loop together, along with the original loop. You see me, during the pause, turn up two of the pots on the mixer, and turn down slightly the one that had been playing. The simpler of these two treatments is simply a narrow band of the audio, extracted from the spectrum.

The other treatment is a little more complex. It’s the Muxlicer (black module with eight vertical sliders in the upper right) clicking through at a steady pace. The module has eight output stages. There’s a main line, and then you can slot in alternates for any of the eight stages. When it’s first heard here, two are playing additional bands of the audio spectrum, which is why those moments stand out.

If you keep an eye on the horizontal lights across the Muxlicer, you can see a little red one pop on to show which channel is playing. The pace at which the lights change is steady. What is random is the sequence, as regulated by a sine wave (from the Dixie II module). It was interesting trying to find a pace that contributes the desired amount of randomness, when I was preparing the patch.

That’s the second time through. The third time through, again during the pause (at 60 seconds), I turn down the original line entirely, leaving just the two treatments that appeared in the previous round. The step-by-step pace is more prominent as a result.

Then I do two more things: I plug first one and then, at about 1:37, a second cable into the ER-301. That’s the large module with two screens in the lower left. What’s happening in the ER-301 is that the full audio of the original loop is, itself, being cut up and looped. There are two channels out of the ER-301 (this is using the Feedback Looper module). One is recording a four-second loop over and over, and the other a two-second loop. The recording of the loops isn’t in sync with the playing, so the snatches overlap haphazardly, piling overtones. If you were to watch the segments accrue, it’s a little bit like a fast motion audio version of posters being layered on the wall of a construction site. 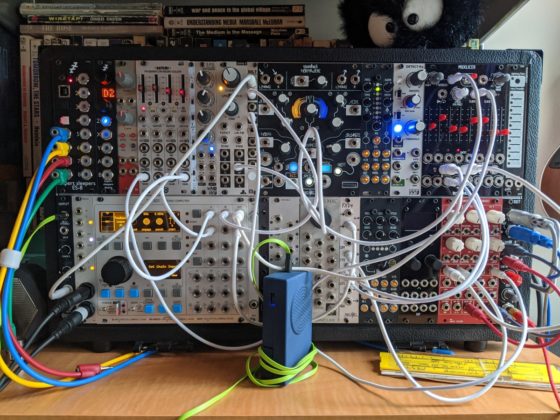