So, to cut to the chase, there’s a big whopping error in the middle of this video. Actually, earlier than the middle. At 1:32 (the full length is 4:37), I connect a cable, and then proceed, over the following minute and a half, to 3:10, to first recognize something is off, and to then sort it out. I had the whole thing plotted, but it had been a long day and I was pretty tired, and I messed it up when I started recording. Still, that minute and a half sounds fine, and even as I was sleuthing what was wrong, I was thinking, “This actually sounds fine, so long as I can fix it soon.” As further evidence I was a bit rushed, the Buddha Machine that is the source of the sound is entirely off-screen. It’s the Chan Fang model, which is all samples of a performance on a qin, an ancient Chinese zither.

Three days/patches ago I mentioned parenthetically, of the big module in the lower left: “Of course, there’s a lot going on inside the ER-301 that’s not viewable.” If you watch that module from 1:32 to 3:10, you’ll get a sense of what moving around its interface is like.

Let’s break the recording down. There are four channels in the mixer, from left to right: one/lavender, two/black, three/yellow, and four/white. They are all variations on the incoming Buddha Machine loop.

Lavender is just the sound of the Buddha Machine loop, unaltered (putting aside the extent to which slight changes in the gain on the initial input do have an influence on the sound). Black and yellow are processed by the ER-301. Both are variations on bands of the incoming audio split off from the overall audio spectrum. Black is on a short delay, so it echoes a bit of the main signal (listen at 1:04 to how it repeats what just preceded it, as if a full register lower).

Yellow is the problematic channel. It is on a two-second loop that is constantly writing over itself when triggered. The signal that triggers the loop is itself fairly long, so the yellow signal doesn’t change that much. The problem was, it’s set in the ER-301 to be triggered by the gate on the top row, and I had it set on the second row. Eventually I figure this out, which is why at 3:10 I change the location of that cable, and at 3:16 the looping kicks in.

As for white, the fourth and final channel in the mixer, it is another band of the audio spectrum, sent through a granular synthesizer. And that covers it. 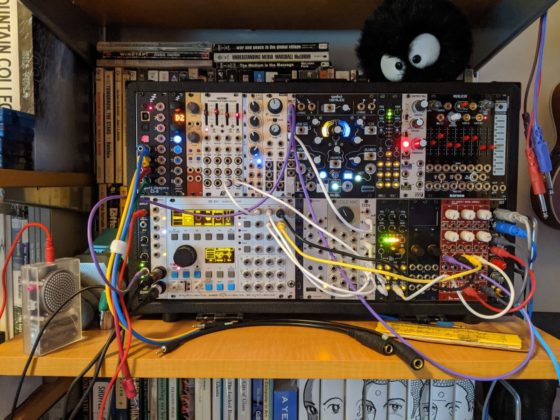