One Buddha Machine, the Philip Glass edition, playing the organ loop, three processed channels of which go into the mixer. When the piece begins, it’s just the signal going through the granular synthesizer (channel two). Then comes the main line (channel one), which is the output of the Muxlicer. There are eight randomly selected outputs from the Muxlicer: six bands of the filter bank, and two of the granular synth, all set at different volume levels. They’re being selected at random, and the clock that sets the pace of the Muxlicer changes regularly. The basic pulse is a square wave from the Dixie II. There’s a hybrid wave from the Batumi, via the SPO, that occasionally makes the Dixie II pick up the pace, as a result of two different combined waves. The third channel of the mixer is a copy of the audio in the second channel, that of the granular synth processing the inbound signal, except it’s going through the ER-301 and being delayed. The intention was to overlap the granular phrase so that there are fewer gaps in the sound. In addition, the value of the delay on the third channel of the mixer is rapidly shifting tiny increments, so its relative position to the second channel is always changing. That about covers it. 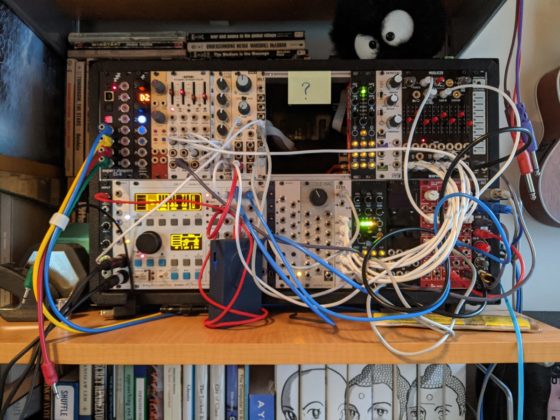