One loop from the fifth generation Buddha Machine, little snatches of it glitching out in a semblance of correlation. At first all that’s heard is the unaltered audio of the source loop. That’s the fifth channel of the mixer (lavender cable). And then one by one, the first through fourth channels of the mixer are introduced. Each is set on a mico-looping procedure of the source loop, varying individually between roughly 100 and 300 milliseconds. They are each set to record over whatever was there before, meaning sometimes there will be silences. And finally, once the main source audio is turned off in the mix (at 1:45), all that is heard is this combination of microloops.

If you’re familiar with the ER-301 module, here’s some additional detail: The unit being used is the Feedback Looper. There are four of these running individually. Each is taking a square wave from the Batumi as its on/off switch to record. In addition, each is taking the next channel’s on/off as its trigger to (un)engage (the fourth channel looks to the first channel, squaring the circle).

That runs for quite awhile, and then at 2:55 the relative pace of the four square waves are altered. This has an impact on when the individual loopers are triggered, and then at 3:09 the Batumi is switched from “free” mode to “quad,” and the levers adjusted further.

For further patch-documentation purposes, here is a shot of the synthesizer: 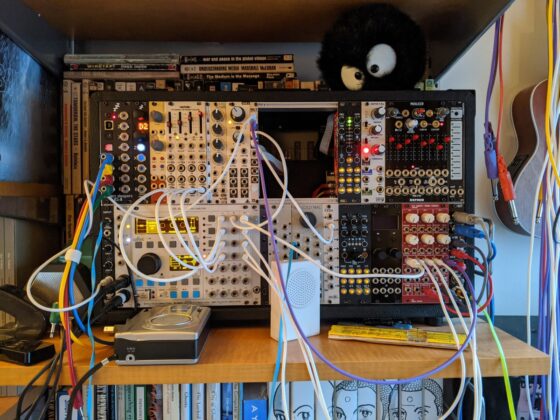