This was an experiment in exploring the device as a whole: not just as a set of loops contained in one object, but the sequence of those loops, and the way the loops progress as a result of the object’s design. All the previous Buddha Machine Variations to date have involved one loop per machine. Here the multiple loops of such a device, one from the second-generation of Buddha Machines, are heard not just in sequence, but in overlapping sequences. They’re considered as a suite.

There are three subsets of whatever loop is playing at a given time. Each is a subloop: one three seconds, one four seconds, one five (in the ER-301 module, using the Feedback Looper unit). Each of the subloops is extracted from a different narrow band of the audio spectrum (via the FDXf module). As the piece proceeds, the button on the side of the Buddha Machine is clicked. One or more of the subloops begins recording the new audio almost immediately, but there is some time before the preceding loop is entirely eradicated. At the very end, the audio cable is pulled out of the Buddha Machine, and eventually all the subloops give way to silence. (This was less sudden when rehearsed, but it works OK here. I’ll be trying this all again with a slightly different approach.)

For further patch-documentation purposes, here is a shot of the synthesizer: 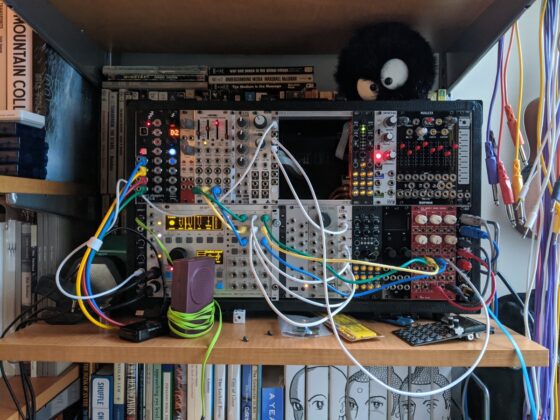