The always inventive Håkan Lidbo has conjured up a proposed tennis “game concept” for the blind and vision-impaired. The game, called Invisiball (note the double l), is played in a highly prepared physical space, one in which sounds simulate the presence of a physical ball. That is, the sounds don’t help locate a ball in physical space. The sounds are the ball, simulating travel within three-dimensional space.

InvisiBall is a game concept for two persons. It’s a game played in a dark room, on a court with loudspeakers in the 4 corners, blindfolded or by blind people. The ball is represented by a tone, mimicking earthly gravity. If the racket, that plays a tone depending on it’s position in height, hit the ball at the right pitch, depth and left/right-orientation, it will fly back to the other player. The referee is a musical robot voice that also keep track of the score – and the whole game is built around music that change with the score between the players. With some training the players can serve, return, smash or lob the “ball” – and even bounce it on the ground. As the ball is invisible the game has a 3d visual interface for the audience. The game serves a training tool for those who have to adapt to a life without eye sight, due to illness or accident – and for us who can see, better understanding the challenges and possibilities of training our hearing sense.

Sound and sports are on people’s minds right now due to the attempts by various professional leagues, including Major League Baseball, to provide some verisimilutude of live, in-person events when the pandemic has required severe restrictions. Baseball is going cross-platform by employing sounds from an official, long-running video game series, MLB The Show. (The game’s title is interesting in this context, suggesting an awareness that baseball is, in fact, a show, long before it was, aside from some cardboard cut-out audience members, only a show.) A player on the Milwaukee Brewers has commented that “pure silence was tough for some guys” before sounds were added. 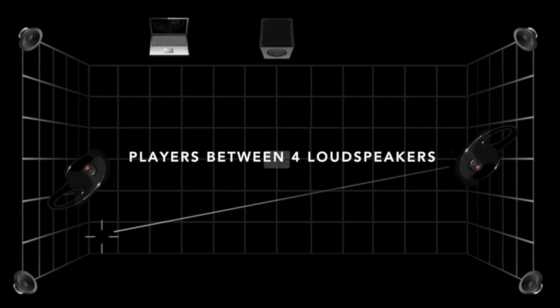 In Lidbo’s Invisiball, however, sound isn’t merely a backdrop that serves a utility purpose. Sound is the game, the framing conceit, the underlying structure, and the focus of the players’ attention. Lidbo collaborated with Magnus Frenning and Jonatan Liljedahl, who developed and programmed Invisiball, and by “young blind swedes.” It was supported by the PTS Innovation Prize (which aims “to promote digital inclusion”).

Video published to Lidbo’s YouTube channel. More from him and about Invisiball at hakanlidbo.com. Last month I wrote about his “hat for social distancing.”