▰ Last week I mentioned I’ve learned many things about myself during pandemic shut-in life, and key among them is that I’m way more into Miss Marple than into James Bond. The very next episode up of Marple, as if to make good on my personal realization, featured none other than Timothy Dalton as guest star (as a would-be successor to Churchill), no less. (Former Bonds do seem so relaxed once the Bonding period is over.)

▰ Not surprised Mick Herron listens to Gavin Bryars (theguardian.com). The Slow Horses books have a lot of attention to sound in them, and ECM Records gets particularly name-checked (Arvo Pärt and Keith Jarrett). I just finished book 6, and look forward to 7.

▰ Got some new noise-canceling (over-the-ear) headphones with this seemingly nifty feature: you run a finger up or down an earpiece to adjust volume. Except that interfaces unintentionally proves much louder (and more audibly annoying) than traditional buttons.

▰ Got new headphones. Been listening to Hildur Guðnadóttir all day (Without Sinking). Will through Wednesday, at least. Except when sleeping. And maybe even then.

A: A live feed from Nest doorbells installed at the entryway to each of their homes.

▰ If I did the math right, then the 500th consecutive weekly Disquiet Junto project will begin on July 29th of this year. Ooh, and this means the 500th project somehow manages to end on August 2nd, one day before my birthday.

▰ The wind crazy at 4:30am, the house rattled like a kid’s toy. I grabbed earbuds and listened to the audiobook of a spy novel, my eyes too tired to focus on my Kindle. I slowed its speed to that of a sleep story: “left … crumbled … tarmac .. in .. its …wake.” Oddly soothing.

▰ The longstanding ban on public performances of Leonard Cohen’s “Hallelujah” will be temporarily lifted tomorrow, January 20, 2021, for a period of 12 hours, from noon until midnight, Eastern Time.

▰ Getting an extra light for Zoom calls has helped, but when I actually step back and look at my desk, it feels like Weegee is probably in the hallway snapping photos for the morning edition.

▰ I’m not signaling anything, just asking a question. If SoundCloud suddenly disappeared tomorrow, people should post their Disquiet Junto tracks to their: 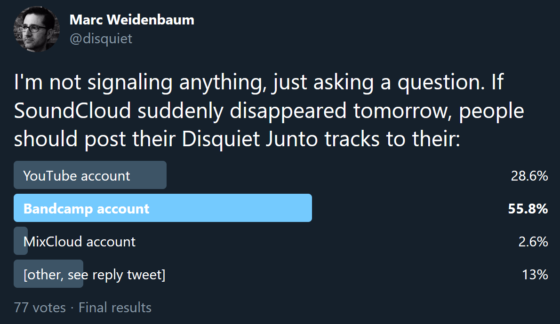 The poll has now ended.

▰ And a poll from the week prior I neglected, it appears, to archive here:

▰ Glad to see that portrait of the guy who came up with the concept of a “Junto” in the first place hanging in the newly redecorated Oval Office (via washingtonpost.com. 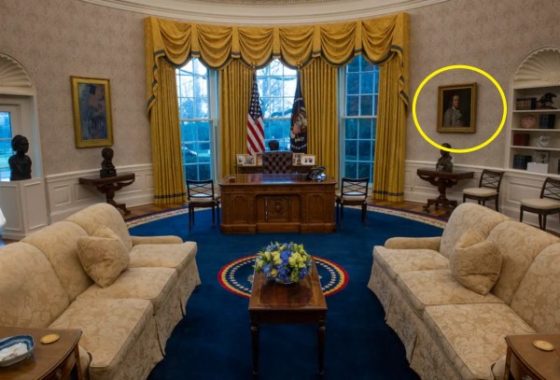 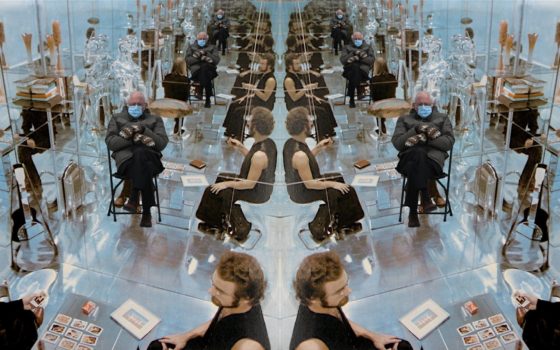 ▰ Have a great weekend, folks. See you Monday. Or heck, maybe Tuesday. Listen to some captions. Read some music. Play some textures.