And just like that, it’s been 25 years since I faxed the paperwork necessary to purchase the domain Disquiet.com. This having been 1996 (December 13, a Friday), no one, I believe, owned the URL previously. I wanted a new “identity,” having then recently left Tower Records’ magazines (Pulse!, Classical Pulse!, and epulse) after seven years of employment (I stuck around in a freelance capacity for another eight years while working full-time elsewhere). I was a big Fernando Pessoa fan, and remain one. The name Disquiet was a natural choice, thanks to Pessoa’s The Book of Disquiet, although much deliberation was involved before it became the obvious one.

At first, Disquiet.com’s material was ported from a site I’d housed on services with names like Netcom and Calweb since 1994, mostly focused on music and comics. The one cool thing was you could mouse over handwritten text on an image (writing on yellow lined paper) and click on the word. Fancy! I wish the Wayback machine was old enough to locate a copy of it. Far as I can tell, it’s lost to the digital dusts of time.

Soon enough I finalized the logo, and I got the site set up, and then I started uploading old articles from Pulse! and other places. In time I added datelines (at the suggestion of my friend Jorge Colombo) and started writing for Disquiet.com, rather than just porting over writing from elsewhere. (It’s hard to describe how new all this was at the time.)

From 1996 to 2007, it was all hand-coded by me in HTML, even the RSS feed. Then I paid someone to port it over to a CMS, and then a friend (Max La Rivière-Hedrick) upgraded that to something properly responsive. Around then I also started collaborating with musicians, later still came the Disquiet Junto (celebrating its own 10th anniversary in less than a month), and now, in a way that feels quite sudden, it’s December 13, 2021, two and a half decades gone by: 25 years I’ve been doing this thing that eventually became known as a “blog,” a few years after I started. I never loved the word, but I’ve made peace with it, and even embraced it.

I feel fortunate that today, December 13, 2021, falls on a Monday. December 13, 1996 was a Friday, giving me the weekend to set things up. Today’s a Monday, so even though I’m looking back a quarter century, the fact it’s Monday, the start of the week, feels like it’s the start of something. Today’s a big anniversary. Tomorrow is just another day, another day to post something else about sound.

Oh, and below is the earliest Disquiet.com snapshot recorded by the Wayback Machine at the Internet Archive, the current Richmond District, San Francisco, offices of which are just a block away from where I was living in 1996. It’s a small web after all. 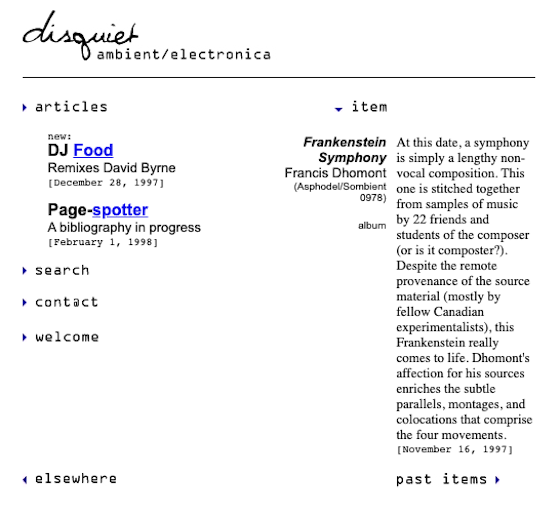 One thought on “25th Anniversary of Disquiet.com”