▰ Me watching Archive 81 last night: This score is very much my jam.

Me looking at IMDB this morning over breakfast: Oh, of course it’s the great Geoff Barrow and Ben Salisbury.

▰ One benefit of watching the TV series Archive 81 is that the score gives you lots of opportunities to identify chords and practice arpeggios (on guitar late at night in my case).

▰ Revisited a favorite trio set: Ginger Baker, Bill Frisell, and Charlie Haden in sublime sync on Going Back Home. It’s from 1994 but YouTubeMusic lists it as 2010 and doesn’t even note the personnel, par for the streaming course. The internet is dark void filled with neglected riches. (I own a copy, but it’s in a box somewhere. Physical music has its own considerable shortcomings.)

▰ Hey, got the This Week in Sound email out five Mondays in a row. Let’s see how February goes.

▰ I try to find half an hour a day for guitar practice. It adds up, the vague sense of facility, like realizing how to build any given chord up from any given note on the fretboard, and thus having more choices for phrasing and voicing. Slow and steady, and there’s no race. (There’s nothing I am less skilled in, and less capable at, that I do habitually than practice guitar. In a learning-a-language sense, I’m maybe in third grade. And, like, we moved from another country at the start of the semester.)

▰ Been testing out the absurdity of the Algorithm. Starting each Monday with an odd-for-me string of searches (e.g., “Icelandic geriatric care,” “aardvark husbandry,” “yacht piracy jurisprudence”), and then seeing what news and products end up surfacing as the week proceeds.

▰ A third of the way through this Becky Chambers novel, and still very much enjoying it. 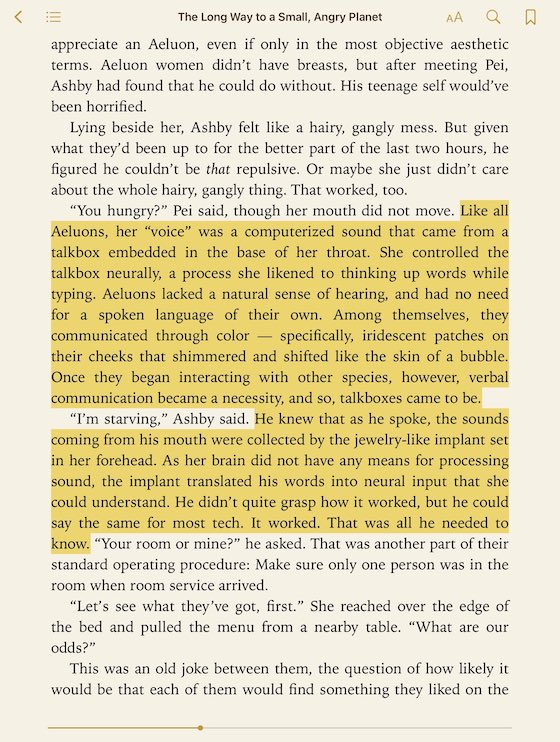 ▰ Question: 🦻 If you use earbuds, when you choose to have just one earbud in, which ear do you put it in relative to whether you’re right- or left-handed? (Sorry that’s a complicated formulation for a question.) 🎧 Thanks.

▰ Have a good weekend.

See you Monday. Or maybe Tuesday.