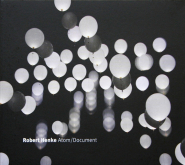 (1) Monolake’s Ballooning Sound-Art Career: The man behind Monolake, which is to say the man behind much of what came to be known as minimal techno, is Robert Henke. And like any solo artist who inhabits a pseudonym, Henke is of two minds. Broadly speaking, the more beat-driven work that emanates from his studio is attributed to Monolake, and the more atmospheric gets filed under his own, given name. But as with anyone accustomed to multiple personalities, two modes of cultural participation haven’t proven sufficient for Henke, who has in recent years been expanding beyond electronic music — and into sound art.

The latest document of his gallery and museum work defines itself precisely as a document. It is titled Atom/Document, and it consist of nine tracks that exemplify the sorts of sounds one might hear if one attends the performance installation work, Atom, which he produced with artist Christopher Bauder. Atom is an eight-by-eight grid of helium balloons, each containing an LED, and each with its motion controlled by a computer. Henke’s music follows and pushes the balloons according a set of self-constraining rules: Anything percussive must trigger an LED, for example.

Of course, this is not a DVD, but a CD — just the sound, though what sound it is. “[FirstContact]” has repetitive piano parts amid clinking percussion; “[Convex]” verges into that subset of white noise that’s either freeway or surf, or both; and “[_Flicker],” just to point to one more example, has the expansive dynamism of the final moments of some grand Hollywood epic, all wavering rumbles, but the drama is restrained by a sense that whatever is occurring is doing so at some significant distance — if the remixed metal of Godflesh perfected the “avalanche on pause,” then these are thunderstorms at a remove.

Speaking of acknowledged distance, each track on Atom/Document has brackets as part of the title, as if to say, “This is just a part of the whole.” For that’s what it is — just the sound, not the vision. And while this is a Henke, not a Monolake, outing, there is plenty of rhythm. It seems that Henke has found a percussive palette all his own, less echoed, less subterranean than Monolake’s, more alive with precision and counterpoint.

There are beautiful still shots (along with a video) of Atom in action at monolake.de, such as this one, of Henke and Bauder at play in the field of their making: 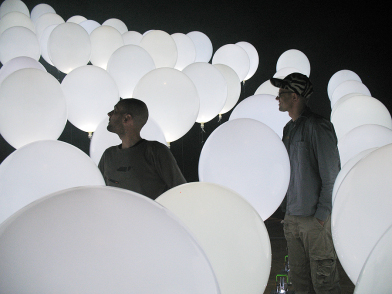 (2.) Quiet Noise from the UK: The choice Disquiet Downstream entry of last week is an in-studio recording by Baraclough, the UK-based trio of Paul de Casparis, Dale Cornish, and Eddie Nuttall. Together they build noisy latticeworks from little more than squiggly rumbles, choked static, rhythmic shorthand, gray drones, and other modest noises (disquiet.com).