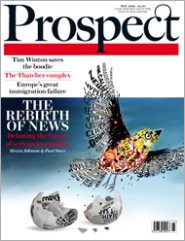 ● Brian Eno (aka Dr Pangoss) on the Recorded Object’s Bright Future (prospect-magazine.co.uk): Prospect magazine has serialized a column by Brian Eno, aka “Dr Pangloss,” each month since March 2009. The latest, May 2008, wisely distinguishes the "record business" ("in the doldrums") from the music business, noting that "the live music scene is exploding." And in Pangloss mode, Eno senses that even the recorded object may have a future: "The duplicability of recordings has had another unexpected effect. The pressure is on to develop content that isn’t easily copyable — so now everything other than the recorded music is becoming the valuable part of what artists sell. Of course they’ll still want to sell their music, but now they’ll embed that relatively valueless product within a matrix of hard-to-copy (and therefore valuable) artwork." For all three columns, as well as a firewall-protected book review from June 2006 by Eno of the memoir of producer Joe Boyd (Nick Drake, Fairport Convention), White Bicycles: Making Music in the 1960s, visit prospect-magazine.co.uk.

● David Toop & Pauline Oliveros Guest-Curate UbuWeb (ubu.com): Each month, the great archive of the avant-garde that is ubu.com asks an individual to select items from its archives for its Featured Resources section, a kind of virtual curatorial act. In May, it's author/musician David Toop (Ocean of Sound), who links to a lot of film, as well as music by La Monte Young and Group Ongaku (Takehisa Kosugi, Syuko Mizuno, Mieko Shiomi, Yasunao Tone, others). In April, the guest curator was Deep Listening guru Pauline Oliveros.

● Video: Curtis Roads on Granular Synthesis (via usoproject.blogspot.com): A three-part video on computer-music figure Curtis Roads is being widely distributed, thanks to easy YouTube embedding. The video's circulation appears to coincide with a new Roads book, Composing Electronic Music (Oxford), and a new edition of his Computer Music Tutorial (MIT). It’s pretty darn informative, with frank talk by Roads about his development of his mode of synthesis, called “granular synthesis.” Of one early piece he says, “I wouldn’t call it a composition. It’s really an experiment.”

● ‘Soundscapes & Listening’ Conference Held in Vienna (soundscapes.fhstp.ac.at): The program this past weekend (May 14-16), included Ellen Waterman's "When it Rains: Experimental Music and the Cultural Ecology," Hein Schoer's "The Sounding Museum," Helmi JÃ¤rviluoma‘s "Soundscapes and People's Environmental Relationships in Change — from 1975 to 2000," Michael Hanisch's "Soundscapes im Computerspiel Grand Theft Auto IV," and Tadahiko Imada‘s "Music Education and the Concept of Soundscape: Experiencing the Earliest Grain of Music", among other presentations, plus numerous concert performances. (Via mediateletipos.net.)