There’s currently a video installation at the Los Angeles Museum of Contemporary Art on Grand Avenue that is impossibly long. In purely practical terms, it is too long to watch in one sitting. Why? At 10 hours and 13 minutes, the video’s running time is simply longer than the museum, better known as MOCA, is open for on any given day of the week. The video cannot be watched in one setting, even if you have the Zen patience and intestinal fortitude required to sit still for close to half a day (unless, of course, a la the late film director John Hughes’s underrated Some Kind of Wonderful, you consider breaking into museums after hours). 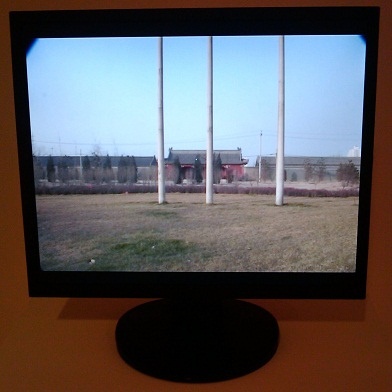 The work is “Beijing: Chang’an Boulevard” (2004), by prolific Chinese artist Ai Weiwei. It is a single video monitor showing 10-plus hours of footage of street corners. The scenes (see photo above, which shows a sample image as displayed currently at MOCA) are each extended mundane shots: slowly moving images of everyday settings, meandering individuals set side by side with arrays of motorcycles, the occasional car passing by, life passing by.

Both combined and separately, the audio and video in “Beijing: Chang’an Boulevard” document the everyday — an everyday that for many visitors to MOCA, including me two weeks ago, is utterly foreign and eye-glazing-overly familiar. The audio is an intentional field recording of the quotidian, and the resulting soundtrack is a mix of common automobile rattlings and exotic mechanical parallels — at least as exotic as an unfamiliar motorcycle or utility vehicle can be.

The soundtrack also provides an unintended score to a neighboring piece, Uruguayan artist Marco Maggi‘s “Hotbed (LA)” (2007), which is shown in the same room. It’s a large grid of stacks of 8.5″x11″ pieces of white paper, the topmost of which is a carefully cut abstract architectural construct, one that, in its proximity to the Weiwei’s urban soundscape, is granted even greater real-city verisimilitude than it might have had otherwise. Turn your head from the Weiwei and toward the Maggi, and the sounds of urban life can easily be transposed to the stark, Tron/THX-1138-like spaces of Maggi’s stark, white geometry. (The Maggi piece previously appeared in the MOCA show Poetics of the Handmade in 2007. There’s an image of it at moca.org.)

For more on the Weiwei piece, check out two articles by the Los Angeles Times’s David Ng, one from 2007, when “Chang’an Boulevard” was part of the exhibit Chinese Video: Chord Changes in the Megalopolis at the Morono Kiang Gallery in L.A. (latimes.com), and one from earlier this year (latimes.com). In an interview with Ng, Weiwei confesses that he himself falls short of the demands of the video’s length: “I don’t care if people watch it all the way through. I can’t even watch it after I’ve edited it. I don’t make videos for galleries or museums. Not even for people to look at. I make it for the dignity of the work itself.”

The Weiwei and the Maggi pieces are both part of the current MOCA exhibit Collecting History: Highlighting Recent Acquisitions, which is scheduled to run from July 12 through October 19. More at moca.org.