The winner of the Northern Arts Prize for 2010 is Pavel Büchler, whose recordings of applause were the subject of an entry here back in October 2008 (disquiet.com). Büchler’s works in various media, and his “You Don’t Love Me” is “an installation that uses a reel to reel tape deck, a bottle of whisky and a loop of found audio tape” (northernartprize.org.uk, via aestheticamagazine.blogspot.com): 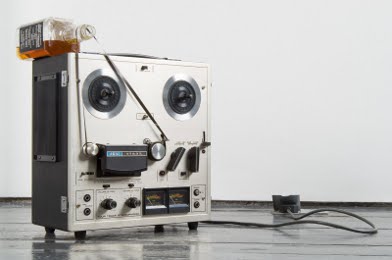 Following up on the Chris (Cabaret Voltaire) Watson South Pole entry earlier this week (disquiet.com), here’s streaming audio from below the Antarctic ice: “Providing an acoustic live stream of the Antarctic underwater soundscape is a formidable challange. (sic) … Underwater sound is recorded by means of two hydrophones by PALAOA, an autonomous, wind and solar powered observatory located on the Ekström ice shelf”: awi.de/en/research.

A visual interface collecting numerous radio stations from around the world that stream their signals, from ABC Classic FM 93.9 on Norfolk Island in the South Pacific to Africa No.1 106.7 in Yaounde, Cameroon: bcdef.org/antenna (via appscout.com): 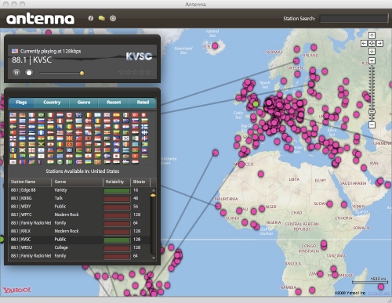 Forget the “Funky Drummer” sample and the “Amen break.” Check out the folk music that Béla BartÃ³k used as compositional launching points: “The composer’s vast archive of Hungarian folk music has been digitized,” writes The Rest Is Noise author Alex Ross, and a fair number of his phonographic recordings have been uploaded in MP3 format”: db.zti.hu (via newyorker.com).

Oddly old-fogyish comment from Geoff Dyer in his New York Times review (nytimes.com) of Don DeLillo‘s new novel, Point Omega: “This prologue and epilogue make up a phenomenological essay on one of the rare artworks of recent times to merit the prefix ‘conceptual.’”Which begs this question: “Rare”? The subject of his comment, and of DeLillo’s book, is “24 Hour Psycho” by Douglas Gordon, who has produced a vast body of work that employs similar approaches to retooling existing familiar film — an approach that is, while often humorous and sometimes revelatory in Gordon’s hands, a fairly common approach in video art, and needless to say an even more familiar approach in remix- and appropriation-friendly contemporary music (witness the 24-hour rendition by Leif Inge of Beethoven‘s 9th Symphony, aka “9 Beet Stretch”: park.nl).

Cory Arcangel, Sam Durant, Christian Marclay, Carsten Nicolai (aka Alva Noto), and Pipilotti Rist are among the artists participating in this project of using the Frank Lloyd Wright‘s interior design of the Guggenheim Museum in Manhattan to their own ends. The show Contemplating the Void: Interventions in the Guggenheim Museum will allow them, and many others, to “imagine their dream interventions in the space for the exhibition.” Also part of the show is Hypermusic: Ascension, a March 11 rotunda collaboration by Harvard physicist Lisa Randall, Spanish composer HÃ¨ctor Parra, and artist Matthew Ritchie (guggenheim.org).

Documentary coming this summer on industrial-rock band Ministry, titled Fix: fixtheministrymovie.com. (It doesn’t appear to be listed in the IMDB.com database yet.)

An album of music made on the Monome, created to raise funds for Haiti (einpuls.bandcamp.com).

Review of Kenneth Kirschner‘s album Filaments & Voids, for which I wrote the liner notes, alongside Radu Malfatti‘s Wechseljahre einer HyÃ¤ne. The author suggests, quite rightly, that the “the importance of silence can easily be overstated here”: tokafi.com.

New blog from the prolific creator of Palm Sounds: mobilemusicmarketing.blogspot.com (via the-palm-sound.blogspot.com).

A lot of coverage coming out of New York on the Unsound festival, including this review of the Moritz Von Oswald Trio: “Their shared improvisation only hinted at the dance floor. It was sci-fi ambient music, with a background wash of pink noise like interstellar dust and puffy tones, pitched and unpitched, arising out of the static”: nytimes.com. (Previous Unsound overview: nytimes.com. More recent coverage of Andy Warhol footage set to music: nytimes.com.)

Bang on a Can composer Michael Gordon reflects from a very personal perspective on his return to his native Miami for a concert of his work, as part of the New York Times’s blog (opinionator.blogs.nytimes.com). … Another Bang on a Can associate, composer Peter Wise, has posted streaming audio for a project at MASS MoCA (muziboo.com, via blog.massmoca.org).

First podcast from the creators of RjDj: more.rjdj.me. … A petition that Apple allow audio-file sharing for music apps. I strongly support this initiative: petitionspot.com. 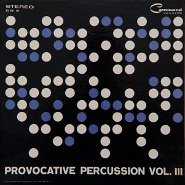 Art critic Joseph Masheck on an exhibit at Minus Space in Brooklyn (minusspace.com) of Josef Albers‘s album covers for the old Command Records label. The exhibit ran through the end of January: “Albers was doing a job, and took it seriously.” (brooklynrail.org, via tommoody.us). I’m not sure Masheck does justice to how well the geometry and implied motion of the Albers covers reflect the ecstatic stereoscopic experimentation (by lite-music star Enoch Light) contained on the records they adorn.

The Lifehacker.com website has been including background sounds as part of its ongoing attention to improving work productivity, including recent posts on whether its readers “use ambient sounds to concentrate” (lifehacker.com) and a Mac-only piece of software titled Ommwriter that combines a blank writing space and ambient noise (lifehacker.com).

The netlabel astorbell.com/remix has set a May 1, 2010, deadline for its open-source remix project.

I’ve finally got proper vimeo.com/disquiet and youtube.com/mwd1 channels going, with “favorited” recommendations popping up on a regular basis. Twitter, as always, is at twitter.com/disquiet. More social-network coordinates at disquiet.com/faq.