From the essay “‘Under the Bridge’: An Orientation to Soundscapes in New Orleans” by Tulane Assistant Professor in Music Matt Sakakeeny, published in the journal Ethnomusicology‘s current issue, Winter 2010:

The “bridge” creates intimacy, enclosing parade participants, maximizing a sense of unity, and the concrete makes for spectacular acoustics, amplifying and multiplying the participatory sound, creating a sort of “unplugged” feedback loop: acoustic, but not shockingly loud, and made louder by the musicians playing at peak volume to compete with the sound of cars and trucks whizzing by above. Ideally, the sounds of the music, the crowd, and the environment work together to orient individuals as a collective occupying a shared space.

The essay, which is highly recommended, draws on soundscape pioneer R. Murray Schaefer’s idea of a “soundmark” (“a community sound which is unique or possesses qualities which make it specially regarded”) and Steven Feld’s extension of that idea, “acoustemology.” Sakakeeny quotes Feld defining “acoustemology,” a reduction of “acoustic epistemology,” as follows: “local conditions of acoustic sensation, knowledge, and imagination embodied in the culturally particular sense of place.” Feld has provided a more succinct definition: “a sonic way of knowing place” (cec.concordia.ca).

Sakakeeny writes about traditional New Orleans music without being beholden to tradition — that’s something many musicians in the city manage to do without getting much credit for it, but people who study the music often fall short. In the article’s second graph, he notes that members of the New Birth Brass Band played bits of rapper DMX’s “Shorty Was the Bomb” (actually “Shorty Was da Bomb”) during a second-line parade for a woman named Adrienne “Shorty” Chancley. (The second-line parade is the tradition in which brass bands play dirges to a funeral, and then celebratory music afterward.)

But what distinguishes Sakakeeny’s article isn’t that he can hear the hip-hop in the jazz — it’s that he hears that jazz in the real world, and how the sonic properties of the world shape the music, not just the audience’s experience of and participation in the music, but the way the music itself sounds. His understanding of music’s role in life in New Orleans helps him hear the music not as sound that takes place, but as sound that makes something of the place, acoustically, in which it occurs. Music isn’t merely a message transmitted from performer to audience; it’s a space-defining invisible-yet-physical force that interacts with (helps define, yet is defined by) the space in which it happens.

The “bridge” he’s writing about is one of the most tragic urban-planning actions in the history of New Orleans, when the construction of the I-10 highway forced the removal of a stretch of a historically black community alongside Claiborne Avenue, lakeside of the French Quarter. As Sakakeeny puts it politely, “by design or default” the construction separated the tourist-friendly Quarter from the primarily black neighborhoods on the other side of Claiborne. Whether or not you believe in ghosts, that socio-geographic history helps explain why this broad stretch of concrete remains, to this day, a place where celebration, such as the one Sakakeeny writes about, takes place frequently and naturally. To take a second-line parade under the bridge is to reclaim that territory, not just physically but, as Sakakeeny writes, sonically.

He covers a lot of ground in the piece, including the proper tempo for a second line (around 100 to 124 beats per minute — anything slower loses people’s interest, and anything faster is too tough to keep up with), and the noise-abatement issues in the Tremé neighborhood, long home to musicians: “differentiating between what constitutes ‘noise’ or ‘music’ in New Orleans has everything to do with the way one is oriented towards sound, and those who hear music as noise have been effective in enforcing silence.” (Recent readers of this site will likely draw a comparison to George Prochnik’s new book, In Pursuit of Silence: Listening for Meaning in a World of Noise, which I’ve written about a few times: disquiet.com, disquiet.com.)

Here’s an image from the article, ragged in its reproduction but still useful in setting the sense of place, showing the Rebirth Brass Band alongside the bridge in November 2006: 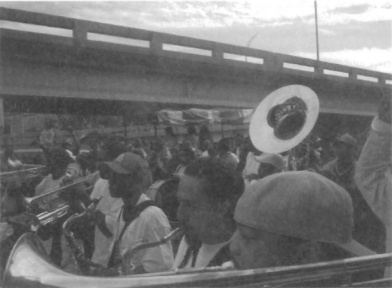 Full article at scribd.com (and as a PDF). Read either version carefully, as some of the pages are out of sequence.

More on Sakakeeny at tulane.edu and at his rootsofmusic.blogspot.com blog.

In related news, my thoughts on the debut episode of the HBO series Treme (a series that Sakakeeny notes in his essay) at disquiet.com.

More on the journal at uillinois.edu. This essay in the current Ethnomusicology issue also looks quite interesting, in regard to the cultural roots of copyleft, but I haven’t had a chance to read it yet: “Composition, Authorship, and Ownership in Flamenco, Past and Present” by Peter Manuel.

2 thoughts on “Quote of the Week: The Soundscape of New Orleans”