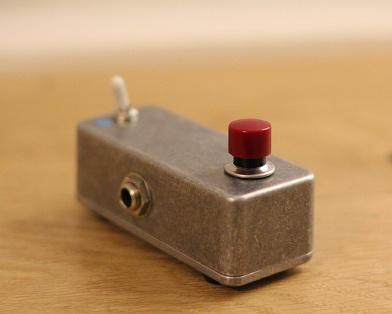 Marcus Fischer once had this art-a-day thing going on, throughout 2009, in which he made one creative thing a day for a year. For most people, that would be a challenge. In retrospect, with Fischer, who is so prolific in his efforts and tidy in his executions, it seems more like a willful act of restraint — i.e., whereas for many people it would be a struggle to do one thing a day, for him the primary demand was to limit himself. In any case, an example of his tireless efforts is this lovely object, shown above and below, which he calls his minimalistic guitar pedal (originally posted at his blog, unrecnow.com/dust). And to accompany the photos, he posted this recording of him utilizing it:

The recording (MP3) comes from a live performance at a December 2, 2010, record-release show for his great album on the 12k label, Monocoastal. It’s an elegant, lightly glitching atmosphere, tempting one to correlate his equipment with his sonic aesthetic.

More on Fischer at unrecnow.com/dust.