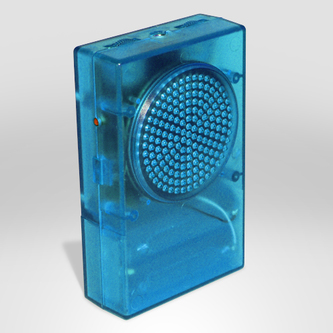 The third generation of the Buddha Machine, pictured above, suggests itself as the least amenable to adoption by musicians, electronic or otherwise, for the simple fact of its content.

Whereas its two predecessors contained loops that hewed mostly to a drone or drone-like composure, edging occasionally toward rhythmic, the third generation, named Chan Fang (ç¦…æˆ¿), contains the sounds of the Chinese zither, a string instrument. So whereas the previous two were of a type with electronic music, and lent themselves naturally to use as both sound source and backing/foundation material, the new one is by nature foreground material. But Dave Seidel, aka Mysterybear, dispenses with any concerns about the third FM3 Buddha Machine with a pair of live solo improvisations in which the device plays a central role, abetted by the second-generation edition and other tools (for the initiated: Auduino, Memory Man delay box, MoogerFooger ring modulator). Titled “Following a Line,” the piece is an extended (almost 15 minute) romance for the zither, the looping samples of which frequently appear center-stage, either adorned by or interacting with a variety of meditative sounds:

And just this morning he posted a second piece in the series:

Update: As it turns out, the music is now the first installment of Seidel’s new mysterbear netlabel: mysterybear.net and archive.org.

(Image from boomkat.com, one of the many distributors carrying the Buddha Machine.)