“They didn’t like to use that word because in Russian ‘dada’ means ‘yes yes,’ contradicting their nihilism.”

With this exceedingly memorable sentence, the host of the Wavelength show on Resonance FM ventures into a nothing-themed episode. Seinfeld, it isn’t. The episode includes examples of sound poetry by these early-U.S.S.R.-era Nothingists, who had to balance their internationalist enthusiasm with chance comparative-linguistic misfortune, and of course the episode drops in the classic in giddy Western art-rock negativism, the Fugs‘ “Nothing” of their debut album — and there’s “Outer Nothingness” by Sun Ra from The Heliocentric Worlds of Sun Ra Volume 1, released the same year as the Fugs album.

The Wavelength show isn’t restricted, however, to verbalized nothing or composed musical explorations of nothing. It finds common ground between sound poetry, music, and sound art by including “3’34” by Pavel Büchler. The work is a sound composition consisting of the silences in 10 different vinyl John Cage record albums, the grooves that lead in and out, the unrecorded parts, the transitions. It takes Cage’s lens of silence-less silence and focuses it back on his recorded output, serving in turn to comment on the peculiar nature of a Cage recording, how it must reconcile the indeterminate and the fixed (MP3). Also mentioned is Yves Klein‘s 1959 art object, Prince of Space, an album with no sound on it — which makes it one more or fewer levels of meta than Büchler’s, depending on your point of view: 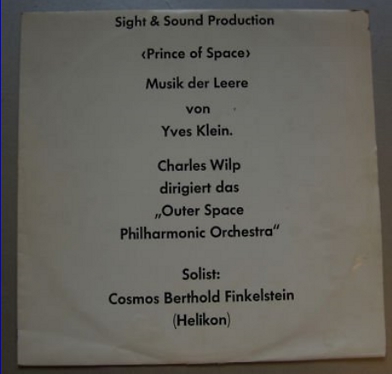 More on the Wavelength episode at resonancefm.com.

Previous coverage here of Büchler: his win of the Northern Arts Prize last year, and his collection of recordings of applause.

(Above image Yves Klein’s Prince of Space from this past auction: ebay.com)