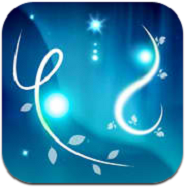 Fans of the great Thicket iOS app who are awaiting an update (one is in the works) can bide their time with a lovely free app produced in part by Thicket’s developers, Joshue Ott and Morgan Packard. Titled Falling Stars, it’s a marketing piece created on behalf of a gum (Trident Vitality, a Kraft subsidiary), though the branding is limited to some relatively low-key logo appearances. It’s a work of playful, generative music-making, with an emphasis on appealing to a broad audience. Generative music is music that results from a system, a set of rules, rather than from a fixed score. It was released on June 27.

Here’s how it works: The user draws vines on the screen, which are hit by falling stars, thus triggering sounds. Each vine signifies a different sound, most “musical,” which is to say tonal and melodic, though there are also simulated hand claps. The user can trigger the five stars by tapping on them, or can wait for them to fall on their own. The stars bounce when they hit vines, which means that the user can set up Rube Goldberg compositions, sending the stars bouncing from one vine to another, or capturing them in literal loops (a complete circle of vine) that will put the star into a lengthy repetitive cycle. The stars also make different sounds when they hit the bottom of the screen, depending on where they land.

There are seven types of vines, selectable from a menu along the bottom of the screen (it disappears with a swipe). A couple of these vines don’t become available until the user shares a composition, via Facebook, Twitter, or email. (It isn’t particularly invasive, as I was able to just email myself a composition to unlock the remaining sounds.) This being a marketing tool, the emphasis on networked participation isn’t surprising, and the app thankfully lets users share their compositions. And should the visualization of small round dots triggering sounds along long lines bring to mind an abstract take on the traditional format of a piece of sheet music, that probably isn’t an accident.

Speaking of non-accidents, rest assured that the sounds that result from Falling Stars aren’t purely random. Quite the contrary, they are musical and enjoyable, owing to careful balance of the vine-related tones, and to some sort of underlying metronomic pulse that keeps everything relatively in sync. 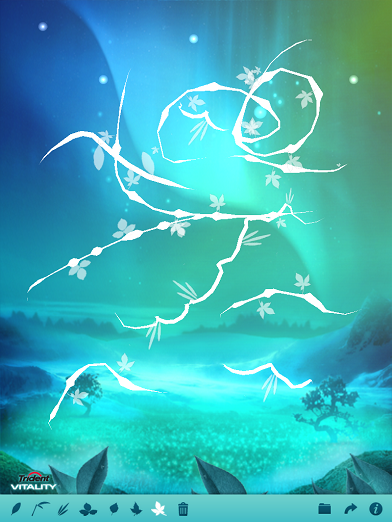 This demo video was posted at the youtube.com account of Interval Studios, home to Thicket’s Ott and Packard. The brief piece is narrated by Ott:

There is additional footage posted by Trident.

Given the advertising-world origin of the app, Falling Stars is worth investigating for what it says about the commercial opportunities for generative music. As of this writing, of the 714 reviews of Falling Stars, almost 90%, 634 in total, give it five stars, the highest rating possible. Of the remaining 73 ratings, more than half are four stars, leaving just 12 three-star, nine two-star, and 16 one-star. The most negative reviews include a few critiques of the app, generally finding it useless, but a lot of them seem to be technical in nature (reporting audio defects that have not been evident on my test units: an iPad 2 and a current, aka fourth, generation iPod Touch). Those “useless” comments are common for generative sound apps, given that they often lack both a self-evident melody and the sort of goal or ending that is the hallmark of a proper game. (The Falling Stars app’s promotional text describes it as an “audio/visual digital toy.”)

The iPhone app based on the film Inception serves as the primary example of the power of a commercial brand to not only draw attention to something as adventurous as generative sound, but to lend it a useful context. The Inception app has 5811 ratings, over 77 percent of which are either four or five stars. By contrast, the various apps associated with RJDJ, the app from which Inception was derived, are more evenly divided between positive and negative responses.

This isn’t to say, merely, that a mass-market commercial property is necessary to garner public interest in generative sound — mass-market commercial properties can bring attention to any number of seemingly esoteric subjects. It’s simply to say that if a popular subject can indeed lend legitimacy to avant-garde ventures, then perhaps those ventures aren’t as esoteric as some might imagine. The Inception app provides the additional evidence that a good story, a rich narrative, can be a grounding force. Inception accomplishes this not only by tying itself to the popular film, but by having built a sense of discovery into the various stages, or levels, of the app. Falling Stars doesn’t have a story, per se, but its natural-world setting brings it out of the realm of pure graphic-score abstraction (the cold grids on which so many generative sound apps are founded), and into something that a broader range of people can relate to. The natural environment is a common source of inspiration in experimental music, and Falling Stars may even help some intrigued users track back to such figures as Stephen Vitiello (whose scores have drawn from images of nature), R. Murray Schafer (who popularized the concept of the soundscape), and Cheryl Leonard (who uses found objects, like bones and rocks, as instruments). 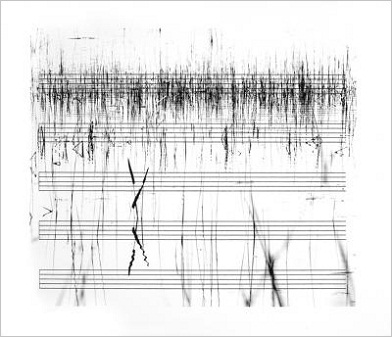 Closer at hand, Thicket’s Ott and Packard have acknowledged (in the text accompanying the video up above that features Ott) the influence of the app Soundrop on Falling Stars. Here’s a demo of Soundrop:

Trident is putting money behind the Vitality app’s promotion. There was a paid gawker.com post, and according to noisenewyork.com, a firm that was also involved in the app’s development, Falling Stars saw “over 100,000 downloads” during its first week of launch (other stats as of late June: “Trident Vitality app is #8 in the new and noteworthy section of the iPad, #15 in free entertainment apps, #85 overall in free apps”).

Get the Falling Stars by Trident Vitality Gum app (that is indeed its full name) at itunes.apple.com. Additional information at the gum’s website, tridentvitalitygum.com/fallingstars.