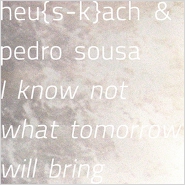 Languor is their business, and business is good. They are d’incise and Marcel Chagrin, who collectively go by the typographically enhanced name heu{s-k}ach, which is likely a pun whose meaning is lost on me. Their recent album on the restingbell.net netlabel bears a title that speaks to its deeply improvisational orientation: I Know Not What Tomorrow Will Bring. The sense of anticipation is especially strong, because the recording, four tracks in all, teams the duo with a third player, Pedro Sousa. The duo has an established sense of musical camaraderie, but Sousa is a new element. A new element can be a chaotic thing, and in music as willfully staid as that by heu{s-k}ach, the unexpected is all the more difficult to subsume. Chagrin plays guitar and drum, d’incise various electronics and sonified objects, and Sousa a tenor saxophone. The result of their collaboration is exemplary drone-influenced European free improvisation — which is to say, it sounds like less than the sum of its parts. Especially recommended is its fourth and final track, “Bruno’s Dream,” which opens with moments of intense delay between notes on Chagrin’s guitar, and when d’incise and Sousa enter to fill the gap, they manage to slow the proceedings even further (MP3). It’s masterful.

On his dincise.net site, d’incise refers to it as “weird-blues-drone-improv,” which seems like as good a description as any. The music, as d’incise’s summary suggests, has the feel of a score to a lost Jim Jarmusch film.

Get the full release at restingbell.net. It’s available for free download, and for sale as a limited edition CD-R.