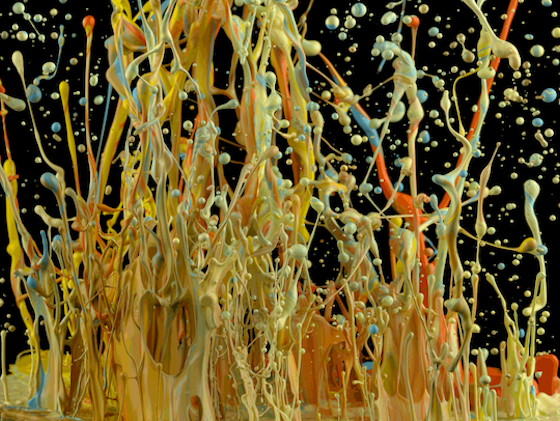 Analog Screensaver: “What does music look like?”is the question that lead to a recent art project by Martin Klimas (viewable in a lightly annotated slideshow at nytimes.com). In Klimas’ work, paint is jettisoned by a speaker cone that responds to particular pieces of music. The images viewable at the Times site include pieces by Kraftwerk, Miles Davis, and Paul Hindemith. Above is an image resulting from “Music for 18 Musicians” by Steve Reich. The association of sound and image here is interesting, but the project is arguably more interesting as an example of common digital functionality, in this case screensaver sonic visualizers, brought into the analog world. (Tip from Mike Rhode, comicsdc.blogspot.com.)

The Bource Supremacy: Oscar 2012 nominations were announced today, and the ones in the “Music (Original Score)” category seem to serve as a retrograde industry analgesic to the groundbreaking win last year by Trent Reznor and Atticus Ross for their work on The Social Network. John Williams, whose name is synonymous with old-school, was nominated for not one but two films (The Adventures of Tintin and War Horse). Howard Shore was nominated for Hugo (like Tintin, an animated film). The remaining two scores are Ludovic Bource‘s for The Artist and Alberto Iglesias‘ for Tinker Tailor Soldier Spy. Not only are all five scores orchestral (or large-scale chamber), but as if to emphasize their old-schoolness they’re all associated with movies that take place in the past. (Iglesias also did Steven Soderbergh’s two-part Che, which means he has become the go-to composer for Cold War atmospherics.) The moribund aura hovering around this sort of antiquated approach is emphasized by the nomination of just two songs in the “Music (Original Song)” category. The caption to this situation is: The Academy didn’t get excited about much this year. Fortunately, Drive and The Girl with the Dragon Tattoo (two of the year’s most sonically conscious films) were acknowledged in, respectively, the Sound Editing and Sound Mixing categories. Full list at oscar.go.com. I’ll be posting my favorite scores of 2011 shortly. 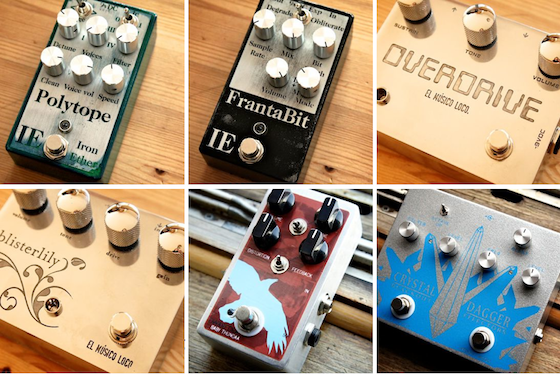 Pedal Power: Yes, there is “A Blog about Hand-Made, Analog Effects Pedals.” The name says it all. Well, the site’s subtitle does. The name of the site, blog.8302.net, is a little more opaque, and according to its author, Barcelona-based Arturo Castillo, the four-digit number signifies nothing in particular. Typical posts feature such language as “Quite often I get asked about the difference between overdrive, fuzz and distortion,” or pay homage to filmmakers (note the last 30 seconds of a video posted in earlier this month). As the videos on his site, as well as his descriptions of pedals, might suggest, Castillo recognizes the equipment as tools for sonic invention unto themselves as much as for traditional employment in the service of guitars. If you prefer your pedal coverage in tidy bursts, Castillo is also at twitter.com/8302net. The pedal blog parallels Castillo’s online shop at, you guessed it, shop.8302.net.

Unmute the Commute: “If an escalator was lubricated to within an inch of its sonic life, it would have much less of one,” writes Peggy Nelson at hilobrow.com. She’s pondering the ramifications and cultural context of a piece by Chris Richards at washingtonpost.com in which he pays close attention to the sounds of public transportation, and in the process interviews Emily Thompson, author of the indispensable book The Soundscape of Modernity: Architectural Acoustics and the Culture of Listening in America, 1900-1933. Richards’ stated and implicit question (“Could this be music?”) is one that is almost frustrating in its obviousness. The affirmative answer is self-evident to, certainly, the majority of readers of this site, and Richards himself cites, of course, the now almost ancient if not fully canonized teachings of John Cage. And yet the question still, in a paper as widely read as the Post, seems to need to be stated as some sort of fresh observation yet to become conventional wisdom. What event, what milestone, would — will — move us beyond having this question repeated? (The New York Times tread on this terrain last year in its “Arts of Summer” coverage.) Nelson, for her part, brings admirable philosophical force to the discussion: “For a thing to function is for it to be in use. And in its use is its constant failure. And in that failure are gaps that force different activity, and allow for different perspective. This is true for cities as well as escalators. And for music. And for us.”

Fantastic Voyage 2012: The sciencemag.org website reports that a “nano-ear” is being developed that “can detect sound a million times fainter than the threshold for human hearing.” This falls under the category of “acoustic microscopy.” The creative and diagnostic potentials are mind-boggling. What confuses me is that I haven’t seen the development mentioned on several bioacoustics and field-recording lists to which I subscribe. It may be just a result of an interesting needle of information being lost in a news-feed haystack, but I wonder if there’s an unfortunate myopia in those areas that focuses on sonic observation of the more immediately visible world. (Tip from Paolo Salvavione, salvagione.com.)

Is “Free” a Gender?: First at actsofsilence.com and then at uncertainform.com, fellow free-culture traveller David Nemeth ponders the statistical gender patterns inherent in electronic music. He quotes Tara Rodgers’ book Pink Noises: Women on ElecÂ­tronic Music and Sound (“Another artist remarked that her entree into the world of elecÂ­tronic music felt as if she had landed on a planet where someÂ­thing had hapÂ­pened to make all the women disappear”) and documents the numerous incongruities. In brief: there are a lot more men than women represented in the free/netlabel scene. In the process, Nemeth notes that one of my recent projects, the Instagr/am/bient compilation, has but one woman among its 25 participants. I fully agree with Nemeth that it’s unfortunate, and as Rodgers suggests, even eerie, the extent to which it appears that men outnumber women in electronic music, and in the free-music subset of electronic music. In his follow-up post, Nemeth says he has decided to cover one female artist a week at minimum henceforth. I’ll just note two things at this stage of the discussion: first, that the next major Disquiet.com curatorial project, due for release shortly, has three women among its eight (or nine, depending on how you count them) contributors: Kate Carr, Paula Daunt, and Marielle V. Jakobsons; second, that the majority of music I write about is made by people with willfully peculiar monikers, and it’s only late in the process of reading up on them as artists that I learn who is behind that moniker and if it’s a man or a woman.

Digital Commerce Watch: In a promising development, the record label Stonesthrow now offers a $10/month subscription fee for digital versions of “all” its releases. It’s a pretty solid deal: 320kbps MP3s, no DRM, month-to-month billing, and apparently some set of “exclusive” materials: stonesthrow.com.