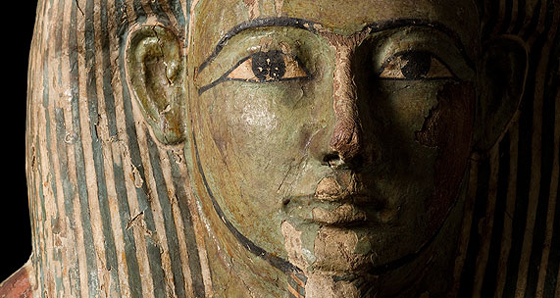 Few sounds are as dutiful as those of simple machines working properly. John Kannenberg captures the workaday, slow-motion apparatus that is the semi-automated storage facility at the Kelsey Museum of Archaeology in Ann Arbor, Michigan:

The sounds he recorded carry with them several meanings. To begin with, they are in stark contrast with the more general, ambient noises that Kannenberg has documented at various museums around the world, from the Art Institute of Chicago’s Modern Wing to the Rock and Roll Hall of Fame in Cleveland, Ohio, an ongoing homage to John Cage’s famed 4’33”. While so much documentary audio captures the wide swath of noise at a specific location, there is little in Kannenberg’s Kelsey shelf documentation aside from the creak of gears, the rattling of wheels, the sedimentary slamming of heavy metal structures. The sounds are, furthermore, significantly distant from the more politically charged museum recordings that served as Kannenberg’s memorial for Ahmed Basiony, the artist slain in the early days of the Egyptian uprising a year ago. And finally, and perhaps foremost, the mortuary aura of these sounds reflects the archeological subject matter of the Kelsey’s holdings.

Kannenberg uploaded the shelf sounds along with another set of library noises, those of a separate mechanical procedure, one in which a human handles the chores. It is the sound of pages being turned in an original edition of the Description de l’Ã‰gypte, the 1798 collection of findings from the Napoleanic Expedition. (It isn’t Kannenberg turning the pages, but Egyptologist T.G. Wilfong, who is also credited with “shelf manipulation” on the first track.) The volume is part of the Kelsey holdings:

There is a special beauty to Kannenberg’s sound work here, because he has captured the ephemeral noises, the intangible byproduct, of an institution dedicated to preserving physical artifacts. He has documented the sonic archaeology of an archeology museum.

Both files were posted to Kannenberg’s soundcloud.com/stasisfield account. More on the Kelsey at lsa.umich.edu. This coming month, Kannenberg will have an extensive exhibit, which involves performance, at the museum. More on that exhibit, titled Hours of Infinity, at hoursofinfinity.tumblr.com. I wrote the foreword to the exhibit’s catalog. More on Kannenberg at johnkannenberg.com.

(The above image is a detail from a mummiform coffin, part of the Kelsey collection, dating from 525 BC.)