▰ Download Before It Expires: The flagship RjDj app of the London-based Reality Jockey firm, home to the Inception and Dark Knight Rises Z+ apps, will no longer be available shortly. It is highly recommended that you download RjDj from the iTunes app store now for your iOS device before the app is retired. Details on the decison at the company’s blog, at rjdj.me. The post mentions that the company’s website will be relaunched on Monday, October 8.

▰ Android Play Pretty Some Day: The website androidmusician.com is a solid compendium of sound/music apps for the Android operating system. It does a much better job than the Play store of displaying the state of tools for such activity. It’s more product-specific than the more cultural/newsy palmsounds.net, and complements it well. 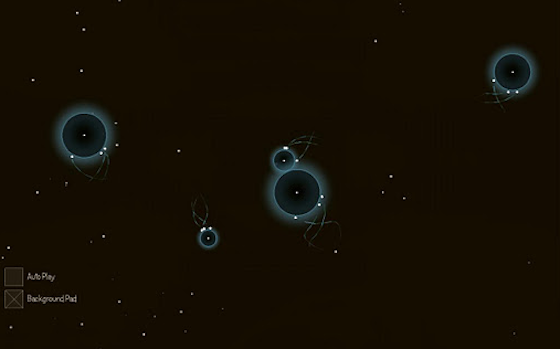 Recent discoveries via androidmusician.com include the generative tool Orbits (screen shot shown above) and the old-school drum machine RD3 — Groovebox (video below):

The site also has a presence at twitter.com/androidmusician. It’ll be interesting to observe, over time, how these app-discovery services function best, whether the users will congregate at sites focused broadly on OS-specific coverage (Android versus iOS, etc.), focused broadly on usage-specific coverage (music, productivity, fitness), or as is the case of androidmusician.com focused at the intersection of a specific OS and a specific user base.

▰ Boinquarius: One of the best music publications about adventurous sounds is the weekly email newsletter of the San Francisco record store Aquarius. The store is located on Valencia Street, not far from such cultural epicenters as the Borderlands science-fiction bookshop and the McSweeney’s pirate store. Aquarius’ newsletter, which usually pops up in email boxes on Friday evenings, has hooked up with the great Boing Boing (boingboing.net). The latter will be publishing one review per day, culled from Aquarius’ loquacious and knowledgeable crew, who are major fans of Krautrock, experimental electronics, and the darkest of death metal, among other things. Here’s a taste of what’s to expect, a review of the Common Eider, King Eider DVD Sense of Place: “wheezy chordal whirs, the vocals layered and wreathed in echo and reverb, a mysterious chorale that instead of building and then fading out, remains somewhat constant, with different voices receding and resurfacing, each part of the music slipping easily from just organ, to organ and voices, making for a constantly shifting landscape of muted melody and vocal texture.” Visit Aquarius Records (online) at aquariusrecords.org.

▰ Sonoma Sound Art: If you’re in the North Bay (and, that is, if the Bay is the San Francisco one), be sure between now and October 14 to take the time to visit the art gallery on the Sonoma State campus, which is currently showing Sound, Image, Object: The Intersection of Art and Music. The participating artists are Mauricio Ancalmo, Terry Berlier, John Cage, Brian Caraway, Chuck Close, Bruce Conner, Lewis deSoto, Chris Duncan, Jacqueline Kyomi Gordon, Victoria Haven, Robert Hudson, Christopher Janney, Paul Kos, Tom Marioni, Jack Ox, Sarah Rara, Steve Reich, Isabelle Sorrell, Alice Wheeler, and William T. Wiley. Indeed, quite a lineup. I hope to have time to write it up soon.

The Reich are a pair of early compositions, including “Clapping Music”; the Ox a set of visuals combining sheet music and architecture drawings (above right); the deSoto a suspended stereo console; the Duncan an LP record made of paper (above left). A tremendous show.

▰ In Brief: Camera-phone footage of Kronos Quartet opening for Amon Tobin last night: youtube.com; apparently someone threw a bra onstage, a first for the ensemble. … Kronos violinist and founder David Harrington submitted a mixtape to wqxr.org, where it is streaming currently; it features Arvo Pärt and DJ Qbert, Erik Satie and John Oswald. … John Kannenberg (of the Stasisfield netlabel) has started a new blog, phonomnesis.wordpress.com; its focus: “Silent memories of sound, art, time, museums, philosophy, and culture.” A definite add to your RSS reader. … In his excellent soundscrapers.blogspot.com blog, Nick Sowers probes a pressing question about fluorescent light sculpture Dan Flavin: “Spending countless hours, days, and years to get his installations just right, was Flavin using the buzzing sound to inform his work?”

The above is a recording by Sowers of Flavin’s buzz.