First up, mercury: “The higher the frequency the more ‘nodes’ will appear along the outer edge of the mercury,” via io9.com:

Second, what a speaker looks like when a 61 Hz tone plays at 60 frames per second, via laughingsquid.com, via Max La RiviÃ¨re-Hedrick:

Third, “Non-Newtonian fluid meets subwoofer,” an experiment by Natasha Carlin (a student this semester in the class on sound I teach at the Academy of Art in San Francisco):

Note: the project was for an earlier class Carlin took, but she used as part of a student presentation in our class. 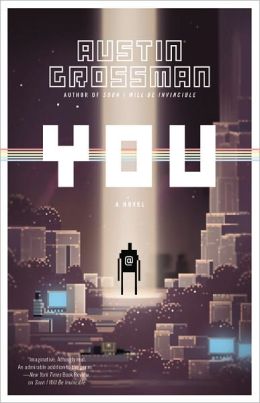 â—¼ Generative Fiction: This is a paragraph from early on in the novel You, written by Austin Grossman (Soon I Will Be Invincible). The novel is set in the world of video-game development. The paragraph is told from the point of view of the book’s main character and narrator. He’s a newb game designer who at this moment in the story, toward the end of chapter seven, is trying to sort out a bug in the software. The paragraph also seems to work as a playful metaphor for composers working in generative environments:

They could have been minor coincidences. I knew by now that a simulation-heavy game was unpredictable. A monster could wander too close to a torch and catch on fire; then it would go into its panic-run mode and anything else it bumped into might catch. Or a harmless goblin might nudge a rock, which then rolls and hits another creature just hard enough to inflict one hit point of damage, which then triggers a combat reaction, and next thing you know there’s an unscheduled goblin riot. The blessing and curse of simulation-driven engines was that although you could design the system, the world ran by itself, and accidents happened.

More on the novel at austingrossman.dreamhosters.com.

â—¼ Reading Sound: This immediately movied to the top of my to-read list: Justin St. Clair‘s Sound and Aural Media in Postmodern Literature: Novel Listening, just out from Routledge. From the description:

This study examines postmodern literature— including works by Kurt Vonnegut, William Gaddis, Don DeLillo, Philip K. Dick, Ishmael Reed, and Thomas Pynchon —arguing that one of the formal logics of postmodern fiction is heterophonia: a pluralism of sound. The postmodern novel not only bears earwitness to a crucial period in American aural history, but it also offers a critique of the American soundscape by rebroadcasting extant technological discourses. Working chronologically through four audio transmission technologies of the twentieth century (the player piano, radio, television audio, and Muzak installations), St. Clair charts the tendency of ever-proliferating audio streams to become increasingly subsumed as background sound.

More from St. Clair at soundculturestudies.net. He’s an assistant professor of English at the University of South Alabama.

â—¼ Dr. Eno: The BBC has some audio (one minute and six seconds) of Brian Eno’s The Quiet Room, an audio-visual healing installation at the Montefiore Hospital in Hove, England: bbc.co.uk. It is very Thursday Afternoon. That’s a good thing. … While on the subject, the Soundcheck show from WNYC has been interviewing musicians about their guilty pleasures; Eno provides a welcome context to his answer: “I’m not really embarrassed about any of my tastes.” (Latter link thanks to Mike Rhode.)

â—¼ More Children: Nice little review by the Seattle Stranger‘s David Schmader of The Children Next Door, for which I did sound design with composer Taylor Deupree, at thestranger.com: “it’s a masterpiece — smart, tough, fearless, and miraculously compact.” Directed by Doug Block, produced by Lynda A. Hansen. The film is playing there at the Seattle True Independent Film Festival 2013.