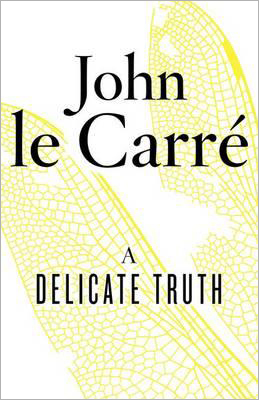 “Above the clatter of the wind came a clicking sound like dominoes collapsing: two sets of clicks, then nothing. He thought he heard a yell but he was listening too hard to know for sure. It was the wind. It was the nightingale. No, it was the owl. … A stray engine barked, but it could as well have been a fox as a car or the outboard of an inflatable.”

That things are not what they seem, even when one is paying attention, is at the heart of the novel. And it doesn’t give anything away to say that the closing moment in A Delicate Truth is a direct reflection of the bit reproduced above.

â—¼ Foley Connection: “Why was the crash sequence in ”˜French Connection’ so dramatic? The smack of a hammer hitting an anvil was added to the ambient sound.” That is from Janet Maslin’s nytimes.com review of director William Friedkin’s recent memoir, The Friedkin Connection.

â—¼ Wind’s Voice: “I attempted to make and record my own Aeolian Harp. I began to notice parallels between the harp and the planes. Both gave the weather a voice.” That’s artist Dawn Scarfe, interviewed at earroom.wordpress.com.

â—¼ Sixth Digital Sense: “[A]n agent at U.S. Cyber Command who has a microchip implanted in his brain that allows him to access the entire electromagnetic spectrum.”Alphas may have been cancelled, but someone got Gary’s powers, via washingtonpost.com. This new series is titled Intelligence.

â—¼ Post Release: “All this focus on controllerism and interfaces and gestures is I think because it’s so important to connect thought and body ”“ a challenge in ways that transcend even the question of technology.” That’s from some additional thoughts by Peter Kirn about the album, Music for Dance, that he previewed here on Disquiet.com earlier in the month: createdigitalmusic.

â—¼ Fast Drone: Despite the association with stasis, the sonic drone moves. It generally moves slowly, the deliberate pace more an emblem of stillness than an actual realization of it. Occasionally we get to hear fast ones, such as the first minute and a half of this preview from Pillowdiver’s new album, Bloody Oath: