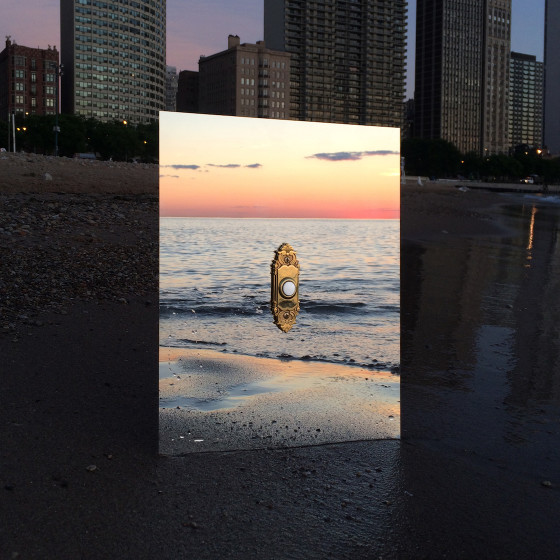 Jeff Kolar’s new album, on the Panospria label, is all about doorbells. Titled Doorbell, it’s a series of recordings he made — music for doorbells — that follows up an earlier exploration he made of the smoke alarm. I wrote the liner notes for Doorbell, which is a free download:

For whom does the doorbell toll? On the one hand, it is an alert for the inhabitant of a building. The bell rings, and that ring lets the inhabitant know that a delivery, a friend, a colleague, or some other visitor has arrived. On the other hand, the bell is a confirmation for the visitors that their presence has, in fact, been registered.

The doorbell is, thus, both ringtone and ringback simultaneously. The doorbell’s ringtone is, to some extent, the choice of the inhabitant, though the number of people who ever elect to fine-tune their doorbell’s sound is likely quite small. The ringback — “a sound made by a cellular phone that is heard by a person who is calling that phone while waiting for the call to be connected”— is a muted version of the doorbell. It is the doorbell heard through the door, shaped by the resonance of the hall in which it first resounds.

It took the artist Jeff Kolar, an obsessive sonic explorer, not only to fine-tune his doorbell sounds, but to record them himself. Kolar’s body of work is steeped in noise so quotidian that it is effectively ignored by, if not inaudible to, most people. Many doorbells can trace their tones back to bells and chimes. Kolar, instead, used a Yamaha organ to construct his dozen rings. The results range from mantra-like beading drones, to haunted-house chords, to swelling wah-wah, to subtle stepwise waveforms.

Kolar’s doorbells first took shape as actual doorbells, hung on a gallery wall, waiting for visitors to trigger them. Only later were they collected as recordings for anyone to stream, download, even — if they have the maker bug — to install at the entrance to their own homes and businesses. As such, the work builds on Kolar’s previous efforts with blissfully mundane aural subjects, such as his study of the fierce sonic textures of smoke detectors. That piece, like his doorbells, began in a gallery and was later documented as a record album. The doorbells also share a kinship with Kolar’s ongoing engagement with that most ubiquitous and ephemeral of sonic mediums: radio waves.

The sounds of Kolar’s doorbells have many inherent associations, but the organ, with its explicit churchly stature, seems to nudge forward one association in particular: the arrival of an evangelical missionary dead-set on sharing salvation.

Kolar provides a bit more information in the accompanying note:

Doorbell is permanently installed as a ringable doorbell system outside of the Urban Gray Ballroom in Greensboro, North Carolina. Each of the twelve Doorbell tracks are designed to loop continuously. This project was produced for the “Museum as Instrument” residency curated by Shannon Stratton and Joe Jeffers at Elsewhere Museum in July 2015.

Album originally posted on December 10, 2015, at archive.org, and then at soundcloud.com/jeffkolar. The surreal cover art is by Aleia Murawski. More from Kolar at jeffkolar.us.