The Gentle Percussion of Brian Crabtree

The Monome developer responds blissfully to a Junto prompt (his own) 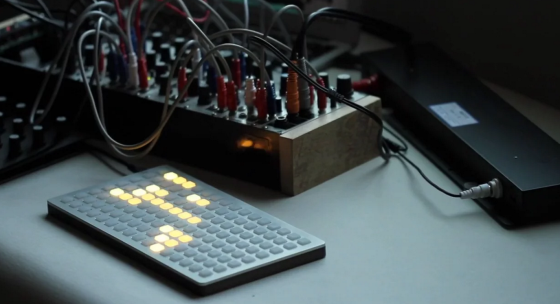 I don’t usually single out Disquiet Junto tracks for separate mention as daily Downstream mentions, but this week, the 223rd in the project series, is an exception. Not only did Brian Crabtree, who developed (with Kelli Cain) the ingenious Monome instrument (the lit-up one shown above), devise the idea for this week’s Junto compositional prompt, he also did the project himself.

The week’s project idea, titled “Layered Sameness,” is to record multiple versions of the same solo piece and to then hear them played back all at the same time. The solo piece is, itself, intended to be a series of loops, all played by hand. Thus there are multiple levels of variation on theme, among them the variation between loops and the variation between each overall take. The result is center-less, often quite blissful, as in Crabtree’s (his SoundCloud moniker is Tehn), which is a gentle percussion pattern, like a gamelan built of champagne glasses:

More on the Monome at monome.org. More from Crabtree at nnnnnnnn.org. Listen to the full set of musical responses to the project, 25 as of this post, at soundcloud.com/disquiet.