For the second week in a row, I’ve participated in Weekly Beats. Whether I make it the remaining 50 is yet to be seen, but I’ve enjoyed it so far. Unlike the Disquiet Junto, the weekly music composition prompt series I’ve moderated since 2012, there is no set theme in Weekly Beats. There are optional themes, but the main idea is simply to encourage making music as a way to learn to make music, along with the support that comes from other people doing so at the same time, and commenting on each other’s work. (I also submitted it to the Disquiet Junto for this week’s project, which is to produce something that will become part of a trio co-composed asynchronously by other participants.)

My second Weekly Beats track is, like the first, an attempt to combine electric guitar and modular synthesizer. The glitchy under beat is a bit of trigger sequencer, along with the byproduct glitches inherent in the looper. The main guitar line is heard with various aspects of the audio spectrum being modulated by medium-paced LFOs, and being sent through the looper for additional effects, all echoes and stutter. And then at the end a snippet of a chord is sent through a different looper, providing a simulated tape-loop fade-out. There’s more going on, like the primary guitar line being put through a filter, but that’s the gist of it.

And here is a photo of the synthesizer patch employed in this piece: 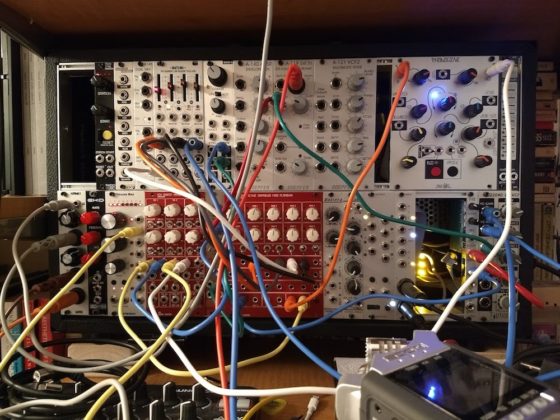