A third week in the Weekly Beats series

This is the third Weekly Beats of 2018 — the third week of the biennial series wherein people upload tracks they’ve recorded as part of a communal challenge. It’s a bit like one of those largely non-competitive marathons where the majority of the people are just there to run alongside each other, and the only person anyone is gauging their performance against is themselves. (Which is to say, it’s like the Disquiet Junto to some degree.) For this week, I continued my efforts to combine electric guitar and modular, to run my guitar through my modular synthesizer in a manner that is, in essence, a very large effects pedal. My main goal this week was to incorporate a third element into the guitar + modular combination. The third element is piece of software called Rack, available for free from vcvrack.com. It’s a virtual modular, for which at this stage well over a hundred different modules have been created, most of the available, like the software itself, for free download. I have a physical module in my rig that lets me send and receive both audio and CV (control voltage) signals, and so I hooked that up to Rack and used Rack-based modules to augment the sounds being processed by my physical modular synth. Last week I ran the full guitar line through a looper, whereas this week I experimented with just sending two bands of the audio spectrum. It’s still very much a test case, but I thought it more important to get something up this week, to maintain the Weekly Beats cadence, than to skip a week out of self-editing. There’s some overdub toward the end, where I layered in material from an alternate take. That latter material involves no live playing. It’s all the circuit afterglow of the recording, where the guitar fragments caught in the system cycle through, morphing a tiny bit as they go. I didn’t upload this piece to SoundCloud, but you can give it a listen on the Weekly Beats website at weeklybeats.com/disquiet.

This is what the virtual modular setup looked like:

And this is what my modular synthesizer looked like: 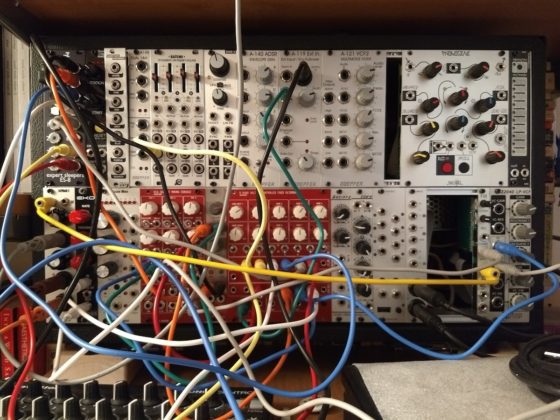