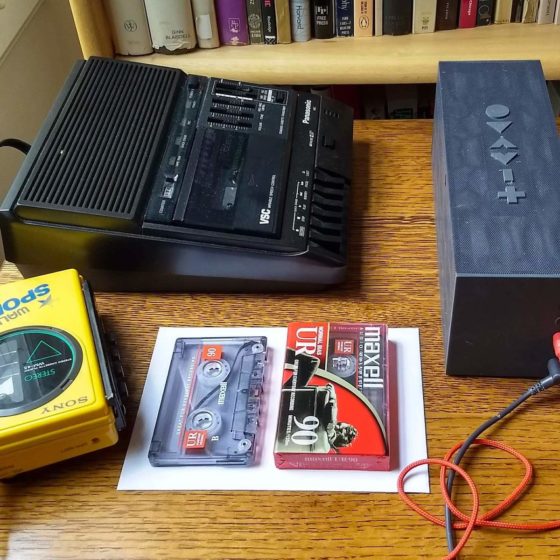 Another little weekend project straight out of any Electronic Music 101 textbook: make a tape loop with an old cassette. I’d never done this before. The cassette tape is from an old batch of unused 90-minute Maxells I have on hand. The loop was recorded on a Panasonic Standard Cassette Transcriber RR-830, a relic of when I’d record interviews on physical cassette and then transcribe from those cassettes. That Panasonic device has a foot pedal, which used to make the start/stop process of transcription a tiny bit more bearable, especially because it can micro-rewind an adjustable amount with each pause.

The audio of my first tape loop came out OK on the first try — I recorded a short strum on an acoustic guitar — but there was an issue with playback on the RR-830: After two or three cycles through the loop, it would come to a stop. I had high hopes of using the RR-830 in a performance setting, given the potential for that foot pedal, along with other attributes of the device, like control over tone and playback speed. (Another issue: there was a not so little gap in the audio, and it was suggested to me to record the audio first on a longer stretch of tape, and to then make the loop from a subset of that tape. I’ll try this approach next time.)

At first I thought the issue with the playback ending on the Panasonic had to do with a poor job on my part constructing the cassette. So, I took it apart and made it more taut by trimming the length of the tape a bit, as well as reinserting the second plastic reel. Still, the Panasonic ceased playing after two or three cycles. To test the newly refined tape loop, I put the cassette in the old, bright yellow Sony “Sports” Walkman, and it played well, over and over and over. Perhaps there’s a setting on the RR-830 that will make it less sensitive, and therefore capable of playing the loop on repeat dependably.

Making the loop was more painstaking a process than I’d expected, even after advance warnings from various experienced people. The standard cassette tape has loose parts, held in only thanks to the tension supplied by five tiny screws. In addition, getting the tape to the correct length, and connecting it into one continuous piece, requires a level of dexterity almost — but, fortunately, not quite — beyond my manual dexterity. I got it to work, which was a lot of fun in the end. The sound quality is excellent, which is to say it is rich with texture, not high-fidelity.

And if you want to try it out, the tape-oriented musician who goes by the name Amulets has a helpful video on YouTube. There’s also a good tutorial at instructables.com.