This variation on a loop from the first generation of the Buddha Machine was as much a test for the AV Squad as it was for the Music Department. I’m trying out a new camera, and the good news is the audio sounds good (as with yesterday’s, the audio was recorded straight to the camera, rather than with the device’s built-in microphone). Clearly I need to get a better viewing angle (at least it isn’t all fish eye like yesterday), and better light, but sound-wise it’s a step forward. And sound is the point.

As for the patch, the loop is heard in five simultaneous modes, left to right in the mixer. Leftmost is the raw audio, and next to that is audio out of the granular synthesizer. Both are having their relative volumes tweaked by sine waves pulsing in sequence. More on those in a moment. The third, fourth, and fifth of the mixer’s channels are all bands of the audio spectrum from the original signal.

The volume of the first and second channel are being raised and lowered in accordance with the relation between the three pulsing waves (the “and” and “or” paths in the Cold Mac module from Whimsical Raps). It’s more subtle than I’d hoped for, because there’s little if any overlap to build on, and I’ll work on that in the future. The third and fourth channels are the main place that pulsing comes from. A square wave at the start of the rotating sequence of pulses is triggering one, and then a gate delay (in the Ornament and Crime module, running Hemisphere) is pushing the other back a moment. In addition, the trigger on the granular synthesizer is receiving a trigger pulse from a square wave at the end of the four-pulse sequence. (I’m not listing the devices in detail because they’re the same ones I’ve mentioned here in recent projects.) 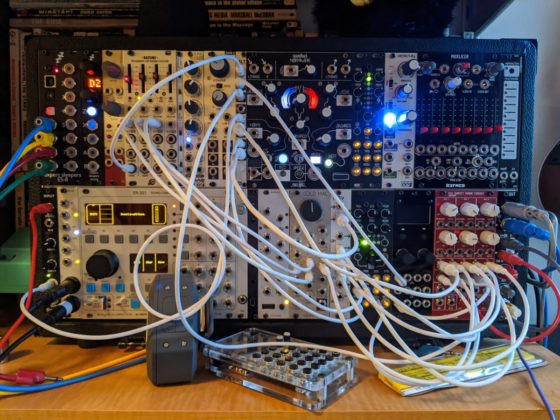