One loop, three strands, many rhythms. A single loop comes out of the second-generation Buddha Machine. It’s split into two. One cable goes straight into the mixer. That’s what’s heard when the first pot is turned up. The second cable goes into a filter bank, two cables from which go into the ER-301. Each carries a different band of the audio spectrum of the source loop. Each of those goes through a different delay in the ER-301, and then the volume of each of those fluctuates (using the ER-301’s Linear Unipolar VCA unit) due to waves coming from the Batumi. The ADDAC mixer has three options for each channel: solo, off, and mute. At the end, each of the three mixer channels is turned off one at a time. 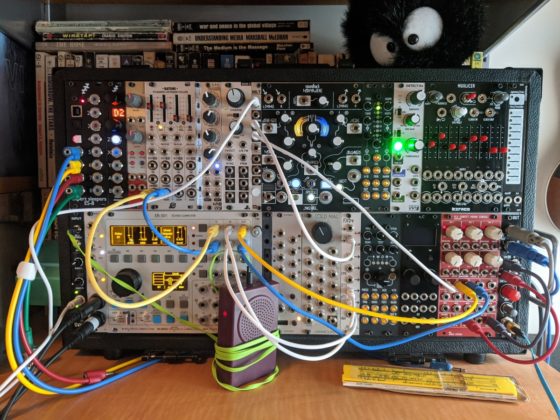