One thing that occurred to me as I’ve reached the end of a full month of daily Buddha Machine Variations is that I am accessing a familiarity with the source recordings that has only one direct comparison for me, which is the year I spent daily listening to and writing about one of my favorite albums of all time, Selected Ambient Works Volume II by Aphex Twin. As I searched for a Buddha Machine loop for today’s exercise, I realized that as I clicked through the options, I knew what would be next: Not only were the individual loops familiar as a friend’s voice on the phone, so too were the loops’ relative proximity to each other. And as I listened to the audio as it was being processed, I adjusted the various options in accordance with the specific loop’s qualities. And when I thought back on how this patch came together, I realized the decisions about what kind of processing to engage in were rooted in the source material. That point is distinct from where I began 31 days ago, when the audio was more of a discreet object, and the processing a discreet application. The divide between them has narrowed.

In any case, this piece has four subsidiary parts. I’ll describe them in brief, one channel of the mixer at a time, from left to right. Channel one is the straight audio out of the Buddha Machine, but with a slight variation on the delay, lending it a warble quality (delay via the ER-301). Channel two is the same unadulterated audio, its volume increasing and decreasing thanks to a slow, shallow wave (courtesy of the o_C module, running the Hemisphere firmware). Channel three is a narrow band of the FXDf-derived audio (from the source loop), put through a slight, static delay (in the ER-301). And channel four is another narrow band of the FXDf-derived audio, set on a little loop that is constantly overwriting itself. The loop is a little over two seconds long, and the trigger for the recording is going at a different pace, so over time the audio that is heard in this loop changes. (The loop kicks in at 1:05, when I connect a cable from the Batumi to the ER-301.) Beyond that, it’s all just me manipulating the various channels, based on my understanding and appreciation of the source loop, its melodic qualities, and the stages that comprise its structure.

There was no entry yesterday because after I recorded it last night I realized there was an issue with the audio, so I waited until today to re-record it. In the process I changed the patch, adding some elements.

For further patch-documentation purposes, here are two shots of the synthesizer: 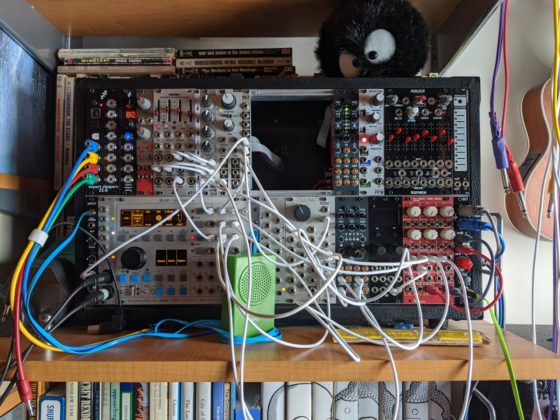 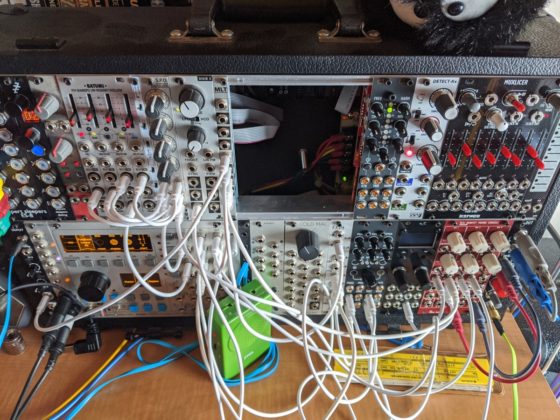 And the settings on the Ornament and Crime module, the screen of which had gone dark while the video was being shot: 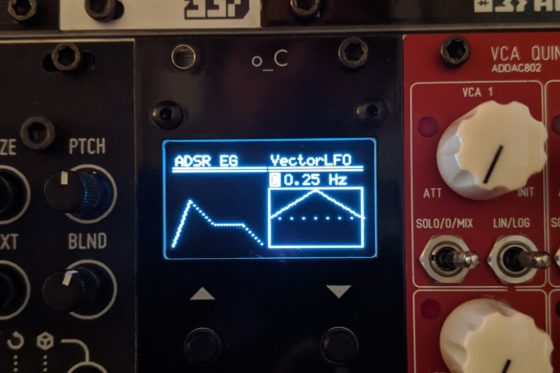