▰ Had a nice 9 days off Twitter (and F’book) for Thanksgiving. Probably will do the same at the end of the year. Read a heap, Wrote, too. Perhaps there’s a connection.

▰ Getting a new laptop means learning to turn off annoying alert sounds. Every time you mute one, another makes itself known. Months will pass at some point, and only then will you look back and realize, “Oh, it’s been a while since an alert went off. I must have gotten them all.”

▰ Neal Stephenson, student of martial arts, momentarily puts aside sticks, spears, and heron-inspired fisticuffs to focus in on sonic weaponry. This is from his new novel, Termination Shock: 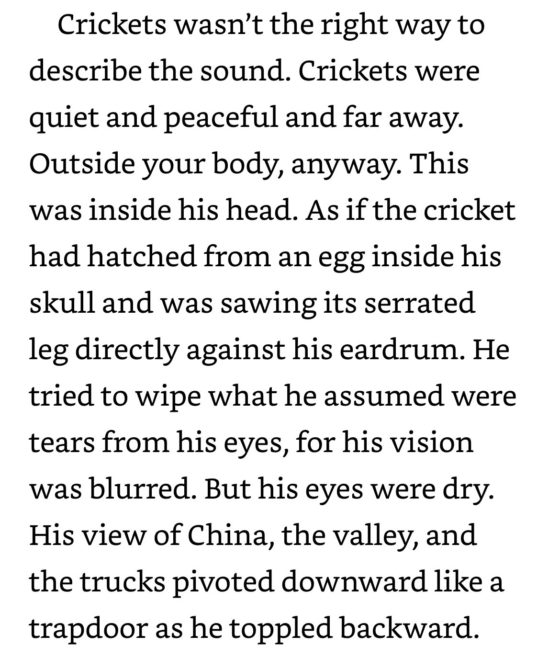 ▰ Pretty ingenious. Do many other music-making devices do this, where the jack labels are upside down, so you can read them easily by just tipping the thing toward you rather than having to read upside down? (This is the OXI One.)

▰ Got a new CD player. (The 5-CD changer died after 30 years of service.) First thing I played was the Necks/Underworld team-up, one of my favorite CDs in recent years. What CD would you play first on a new player? (Possible answer: What’s a CD player?)

▰ If you’ve been online long enough (for context, this website turns 25 years old in a few days), then sometimes simply seeing a hi-def video on YouTube of someone walking around Seattle in the snow, the image’s four edges confined within the mundane page interface, can seem truly remarkable.

▰ In the Lucier, the sound as a whole decayed with each generation of recording.

In the Reider, each recording is no less clear, in sonic terms, than its predecessor; only meaning decays.

▰ I am screaming in a franchise different from the one you are in now.

▰ My top 5 artists of the year were:

The famed unintended Golden Gate Bridge noise definitely happened, but I can’t say it’s been as big a presence in my life as it has been in the news.

▰ Just left someone a voicemail. I think I need to take a brush-up course. Maybe there’s still a Cyber Monday sale for a video tutorial master class.

▰ The thing where you transfer a 60,000-word Scrivener document from a dying laptop to a brand new laptop with a different operating system and you can’t drag and drop so you open it from the menu and it works and you reflect on the dramatic power of dispensing with commas.

▰ Me: So many newsletters.

Also me: If DeLillo had one, I’d sign up in a second and pay for it.

And: I need to get my (unpaid) newsletter rolling again.

And then: Yeah, just imagine DeLillo sending sentences of dread to millions of readers.

And: Oh, the news has that covered.

When I typed that I had no idea that barely 15 minutes later someone would drive slowly down the block with a very very flat tire, which is essentially the full Sensurround experience when it comes to Porter Ricks.

Moved on from Biokinetics (1996) to Shadow Boat (2016), and now I recognize why I keep accidentally calling my Tensor guitar pedal Tresor.

This week in the Disquiet Junto, participants in the music community are combining field recordings from nature and civilization. Playlist in progress below. Join in at disquiet.com/0518.

▰ And on that note, have a good weekend. I’ve got 100 pages to go on the new Neal Stephenson novel, and then it’s either the new Fonda Lee or the final Expanse, plus one I’m reading about the history of risk (not Risk). And some personal writing. And guitar practice. And rest. 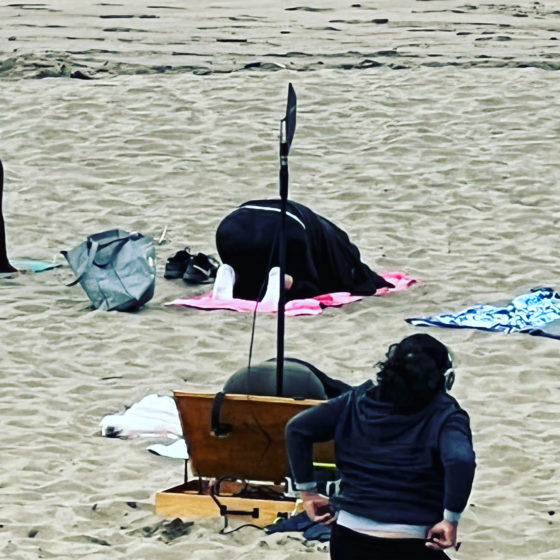 Stumbled upon an outdoor “immersive” yoga session at the beach, where I’d gone to check out the king tide (which is, indeed, quite high). Everyone wore “silent disco” headphones, and the instructor spoke into a headset. This contraption appears to be the transmitter (which at first I mistook for a fishing rod, many of which were planted in the sand closer to the water).

“Our live set’s become increasingly complex recently; we’ve been doing stuff that’s been vastly too much information for most people to deal with and I think it’s quite interesting watching how people behave in those situations, under those circumstances.”

It’s day 3 of my archival ambient advent calendar countdown to the 25th anniversary of Disquiet.com, which was founded December 13, 1996. This interview I did with half of Autechre in 1997 is probably the most-read thing on this website (er, blog).

And at a friend’s coaxing, here’s another highlight:

Me: I think that the mathematician Joseph Fourier is a godfather of electronic music.

The Assignment: Combine sounds of nature and civilization. 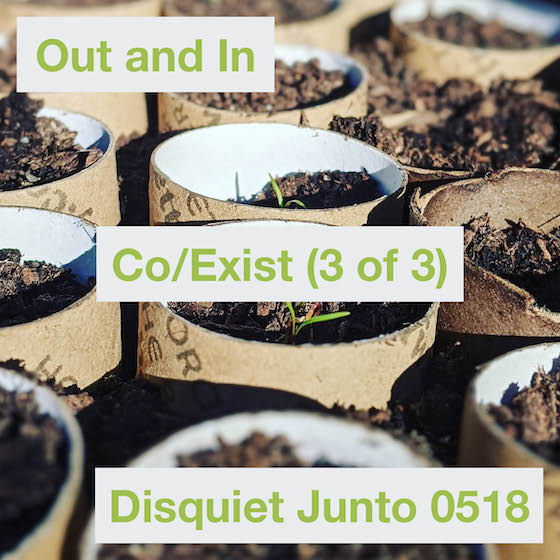 Disquiet Junto Project 0518: Out and In (Co/Exist 3 of 3) The Assignment: Combine sounds of nature and civilization.

This is the third and final stage of a three-part project sequence. You needn’t have participated in either of the two preceding stages to do this one. Thanks to Alan Bland and Mark Lentczner for having proposed the project.

There is one step for this project: Take the sounds of “nature” and “civilization” as recorded by other members of the Disquiet Junto and combine them into one single piece of music/sound.

You can locate the “nature” sounds in the playlist and discussion thread for the first project:

You can locate the “civilization” sounds in the playlist and discussion thread for the second project:

It is recommended that you use only one “nature” sound and one “civilization” sound, though the choice is certainly up to you.

Seven More Important Steps When Your Track Is Done:

Step 1: Include “disquiet0518” (no spaces or quotation marks) in the name of your tracks.

Step 2: If your audio-hosting platform allows for tags, be sure to also include the project tag “disquiet0518” (no spaces or quotation marks). If you’re posting on SoundCloud in particular, this is essential to subsequent location of tracks for the creation of a project playlist.

Note: Please post one track for this weekly Junto project. If you choose to post more than one, and do so on SoundCloud, please let me know which you’d like added to the playlist. Thanks.

Length: The length of your finished track is up to you.

Title/Tag: When posting your tracks, please include “disquiet0518” in the title of the tracks, and where applicable (on SoundCloud, for example) as a tag.

More on this 518th weekly Disquiet Junto project — Inside Out (Co/Exist 3 of 3) (The Assignment: Combine sounds of nature and civilization) — at: https://disquiet.com/0518/

This is the third and final stage of a three-part project sequence. You needn’t have participated in either of the two preceding stages to do this one. Thanks to Alan Bland and Mark Lentczner for having proposed the project.